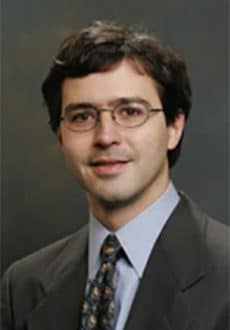 Fernando Lisboa Teixeira received his Ph.D. degree from the University of Illinois at Urbana-Champaign in 1999, where he was recipient of
the IEEE MTT-S Graduate Fellowship in 1998-1999, and his M.S. and B.S. degrees from the Pontifi cal Catholic University of Rio de Janeiro
(PUC-Rio) in 1995 and 1991 respectively, all in electrical engineering. From 1992-1996, he worked for defense and satellite organizations
in Brazil, where his responsibilities included frequency coordination and transmission plans for digital and analog carriers in communication satellites, study on the impact of inclined-orbit operation on link performance, and development of spacecraft antenna specifi cations
for future Brazilian satellite systems. His Ph.D. dissertation at the University of Illinois focused on the development of new computational
electromagnetics (CEM) algorithms with broad-based applicability. From 1999-2000, he was a postdoctoral associate with the Research
Laboratory of Electronics, Massachusetts Institute of Technology, where he worked on scattering from continuous and discrete random
media for remote sensing applications. In 2000, Dr. Teixeira joined The Ohio State University (OSU), where he is currently an associate professor in the Department
of Electrical and Computer Engineering. He is also affi liated with the ElectroScience Laboratory (ESL) at OSU and serves on the advisory board of the newly created
ESL Industrial Consortium for Electromagnetics and Radio Frequencies (ESL-CERF). His current research interests include time-domain CEM, ultra-wideband remote
sensing, metamaterials, and electromagnetic sensors for exploration geophysics. Dr. Teixeira was the originator of many key developments in fi nite-diff erence
time-domain (FDTD) and finite-element time-domain (FETD) techniques that were later incorporated into commercial CAD software for RF and microwave applications.
At OSU, Dr. Teixeira has served as principal investigator in many research projects funded by government and industry, and has published extensively with his graduate students. He has authored over 95 journal articles and 150 conference presentations, and has published several books. He received many awards for his research,
including the CAREER Award from the National Science Foundation in 2004, the triennial Henry Booker Fellowship from the US National Committee of URSI in 2005,
and the OSU College of Engineering Lumley Research Award in 2004 and 2009. Dr. Teixeira is a Senior Member of IEEE actively involved with the MTT, AP, and GRS societies. He has served Chairman of the IEEE AP/MTT-S Columbus Chapter during 2004-2006, and currently serves as associate editor for the IEEE Antennas and Wireless
Propagation Letters. He is a member of Phi Kappa Phi, Sigma Xi, and Commissions B and F of URSI.