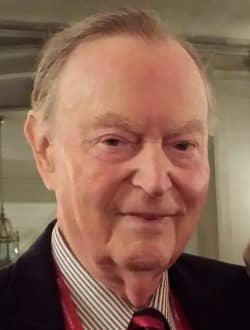 Ferdo Ivanek, life fellow of the IEEE, passed away on 2 October, 2021 at the age of 98. He was married to Vojka who passed away in 2010 and has two sons Ivan and Željko. Vojka was project manager at Stanford University for decades and accompanied Ferdo to many of the IEEE International Microwave Symposia throughout the years.

Ferdo Ivanek received the Dipl. Ing. and Dr. techn. Degrees in Electrical Engineering from the Technical University in Vienna, Austria. Until 1967 he worked in Yugoslavia on the introduction of microwave radio systems, on radio equipment design and manufacturing start-up. From 1959-1962, he was on leave of absence for research at the Microwave Laboratory, Stanford University. In 1967, he joined the Fairchild R&D Laboratory for work on communications applications of new solid-state microwave devices.

Ferdo worked on many R&D projects including solid-state microwave components. He was also the director of research programs and then founded his own independent consulting firm. He published more than 50 journal articles and conference papers, and coauthor of a book on MW Communications.