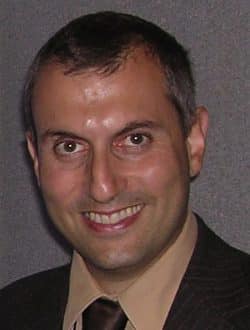 Federico Alimenti was born in Foligno, Italy, in 1968. He received the Laurea degree (magna cum laude) and Ph.D. degree in electronic engineering from the University of Perugia, Italy, in 1993 and 1997, respectively. In 1993 he held an internship at Daimler-Benz Aerospace, Ulm, Germany. In 1996 he was recipient of the URSI Young Scientist Award and Visiting Scientist at the Technical University of Munich, Germany. Since 2001 he has been with the Department of Engineering at the University of Perugia as an Aggregate Professor, teaching the class of Microwave Electronic. Between 2006 and 2010 he was a member of the Academic Senate in the same university. Between 2011 and 2014 he was the scientific coordinator of the ARTEMOS project, ENIAC call 3, 2010. In 2012 he won the “Element 14 Medical Design Award” by proposing a disposable clinic thermometer on a band aid. In 2013 he has been the recipient of the IET Premium (Best Paper) Award and he was the Technical Program Committee (TPC) Chair of the IEEE Wireless Power Transfer (WPT) Conference. In the summer 2014 he was Visiting Professor at the Ecole Polytechnique Fédérale de Lausanne (EPFL), Switzerland, recipient of a best conference paper award (IEEE RFID Technology and Applications Conference, Tampere, Finland, September 2014) and co-recipient of a best student paper award (IEEE Wireless Power Transfer Conference, Jeju, Korea, May 2014). In 2015 he get the national scientific qualification in electronic (MIUR, January 2015). He has participated at the Summer School 2017, held at Infineon Austria AG, Villach, as Keynote lecturer. In 2018 he got the qualification as “full professor” and won the “Mario Sannino” Award for the best research in the field of microwave electronics; the award was sponsored by the Microwave Engineering Center for Space Applications (MECSA). Since 2019 he coordinates an industrial research project on “Integrated Noise Built-In Test Equipment and Receivers Calibration”; the study is funded by Infineon Technologies Austria (IFAT). In 2019 he also won a PRIN-2017 national project with the following interdisciplinary proposal: “intEractions between hydrodyNamics flow and bioTic communities in fluvial Ecosystems: advancement in dischaRge monitoring and understanding of Processes Relevant for ecosystem sustaInability by the development of novel technologieS with fIeld observatioNs and laboratory testinG (ENTERPRISING). His scientific interests concern the design and the experimental characterization of RF integrated circuits in CMOS and BiCMOS technologies as well as the development of microwave circuits on cellulose-based substrates. Federico Alimenti has authored more than 190 papers in referred journals and conference proceedings. He has co-authored several books chapters an Italian (RM2012A000190) and a European (EP2660755) patent on zero-power wireless sensors. The H-index of Federico Alimenti is 22 with more than 1800 citations (source Scopus); 25 with more than 2400 citations (source Google Scholar). Federico Alimenti is Senior IEEE Member.