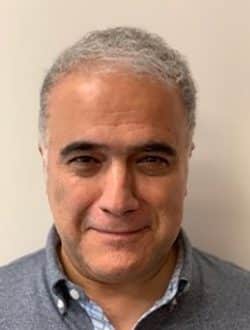 Faramarz Kharabi received the B.E. degree from Stony Brook University, Stony Brook, NY, USA, in 1983, and the M.S. and the Ph.D. degrees from Lehigh University, Bethlehem, PA, USA, in 1985 and 1989 respectively. From 1991 to 2002, he was with AT&T Bell Labs, Lucent Technologies and Agere Systems working on modeling and end to end simulation of first and second generation of TDMA, CDMA and GSM wireless Base station transceivers and device modeling of Phemt devices used in optoelectronic Transmitter/Receiver systems at 1Gb/s, 10Gb/s and 40 Gb/s. In 2003, he joined RFMD/Qorvo where he was a principal engineer responsible for developing the Internal Models for Phemt and GaN Switches and PA’s. Currently, He is a Senior Member of Technical Staff in charge of improving the nonlinear performance of foundry SOI models for internal designs.

He has served as a reviewer for IEEE T-MTT since 2003 and has also served as a member of Technical committee for IEEE CSIC from 2013 to 2016. He is a Senior member of IEEE.