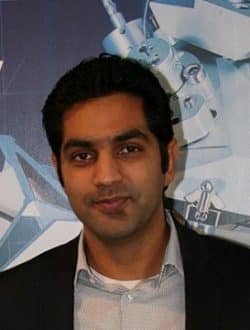 Faisal Ali Mubarak (M’12) was born in Lahore, Pakistan, in 1982. He received the B.Sc. degree in electrical engineering from the Rijswijk Polytechnic Institute of Technology, Rijswijk, The Netherlands, in 2006, and the M.Sc. degree in electrical engineering from the Delft University of Technology, Delft, The Netherlands, in 2009. In 2009, he joined the VSL-Dutch Metrology Institute, Delft, where he is currently a Principal Research Scientist with the Department of Research and Development.
His current research interests include RF component measurement techniques up to millimeter-wave frequencies. In 2017, he was one of the co-founders of Vertigo Technologies, Delft, a company developing innovative  measurement techniques and instruments.
Mr. Mubarak is a member of the International Consultative Committee for Electricity and Magnetism Working Group on Radiofrequency Quantities and the European Association of National Metrology Institutes technical sub-committee on Radiofrequencies and Microwaves (WG-RF). He is also a member of the IEEE MTT-11 Technical Committee.  He was a co-recipient of the Outstanding Group Achievement Award of the Delft University of Technology and the Ritsema van Eck Prize for designing and launching the first university satellite of The Netherlands in 2007.