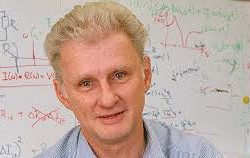 Erik Kollberg was born in Stockholm midsummer 1937. 1964 he married Ulla and they have three children
and six grandchildren. He received PhD from Chalmers University Technology, Gothenburg in 1970 and
became a full professor at Chalmers 1979. Throughout his carrier he has been devoted to development
of ultra low noise receivers for millimeter and submillimeter wavelengths. The title of his PhD theses
was “Rutile Travelling Wave Maser Systems for the frequency range 1.3-6.2 GHz and Radio Astronomy
Application”. Kollberg’s research was focused on development of low noise millimeter and submillimeter
wave devices and systems aimed for radio astronomy applications. He was responsible for the Onsala
Space Observatory receiver group and occasionally he participated in radio astronomy observations. He
was deeply involved searching and subsequently discovering CH molecules in interstellar clouds.
He was rewarded an honorable doctorate at the Helsinki University of Technology 2000. He received
several honorable rewards, e. g. he was invited to California Institute as a Fairchild scholar in 1990. He is
a member of the Royal Swedish Academy of Science (which decides on who will achieve the Nobel price
in physics). He was invited as a guest professor at École normale supérieur, Paris. He was active in many
inȵuential scientific organi]ations. +e is Fellow of Ζ(((.
.ollEerg developed maser amplifiers from . to  *+] and the\ were all used at 2nsala. Ζn particular the
35 GHz maser is interesting due to the new innovative image line slow wave structure.
However astronomers required receivers for higher frequencies. Schottky diodes based on III-V materials
*a$s Ζn$s etc were developed and used in  *+] mi[ers. Cooled +(0T amplifiers were essential in
reali]ing low noise ΖF amplifiers for mi[er receivers.
Much improved mixer performance was achieved when SIS (Superconductor Insulator Superconductor)
devices with a stronger nonlinearity in the current-voltage were introduced. Thanks to a fruitful
cooperation with the physics department at Chalmers mixers for frequencies from 40 to 115 GHz were
readily developed.
Another fruitful cooperation was established with a Russian group of researchers resulting in early
demonstration of the low noise HEB (Hot Electron Bolometer) mixer. HEB mixers were developed around
1.5-3 THz with receiver noise temperatures of about a few 100 K. Interestingly Kollberg showed for the
first time agreement Eetween theoretical and e[perimental noise temperature. Ζt is oEvious that Tuantum
noise is an important and unavoidable noise contribution. Kollberg’s group supplied the ESA submillimeter
space telescope Herschel with HEB mixers.
In implementing a mixer a local oscillator it is necessary but not easily realized. For submillimeter receivers
multipliers are frequently used. Kollberg invented the hetereostructure barrier varactor diode (HBV). Due
to the symmetry of the capacitance vs voltage relation only odd harmonics are present allowing a great
simplification in designing multipliers.
It should be pointed out that a large number of collaborators have contributed to the results shown above.