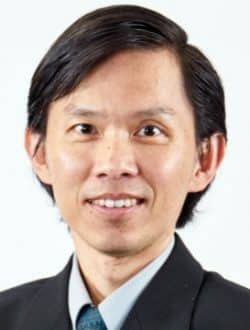 Eng Leong Tan (SM’06) received the B.Eng. (Electrical) degree with first class honors from the University of Malaya, Malaysia, and the Ph.D. degree in Electrical Engineering from Nanyang Technological University (NTU), Singapore. From 1999 to 2002, he was a Member of Technical Staff at the Institute for Infocomm Research, Singapore. Since 2002, he has been with the School of Electrical & Electronic Engineering, NTU, where he is currently an Associate Professor. His research interests include computational electromagnetics (CEM), RF/microwave circuit and antenna design.

Dr. Tan has been very active in IEEE activities for many years. He has served as Chair and Past Chair for IEEE Singapore MTT/AP Chapter. He is the founding faculty mentor for AP-S and MTT-S Student Branch Chapters in Singapore. His service commitment and leadership has brought the chapter to win 2013 IEEE AP-S Best Chapter Award and 2014 IEEE MTT-S Outstanding Chapter Award. He is a member of IEEE AP-S Education Committee, and Membership and Benefits Committee, and the current Chair of IEEE Education Society Singapore Chapter. He has been actively involved in organizing many conferences, including General Chair of PIERS 2017 Singapore, TPC Chair of ICCEM 2020, APCAP 2018 (Auckland) and 2015 (Bali), as well as various key committee roles in other conferences. He was the IEEE AP-S Region 10 Distinguished Speaker 2015 and has been invited to deliver talks/demos on educational mobile apps and CEM methods at several cities in India, Japan and China. He is a Fellow of the Electromagnetics Academy and a Fellow of ASEAN Academy of Engineering and Technology.