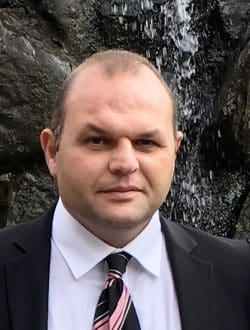 Edward Gebara received his B.S. (with highest honors), M.S., and Ph.D. degrees in Electrical and Computer Engineering from the Georgia Institute of Technology, Atlanta, in 1996, 1999 and 2003, respectively. From 1999 to 2000 he was an invited scientist at Chalmers University, Sweden.

In 2001, Dr. Gebara applied the results of his research to define the core technology for Quellan, Inc as its initial employee, which is now part of Intersil (NASDQ: ISIL). These technologies served as the basis for signal integrity solutions developed for the enterprise, video, storage and wireless markets.

At Georgia Tech Dr. Gebara has supported and lead the mixed- signal research efforts from 2003 -2011. The team’s research interest is to develop the foundation of alternate modulation schemes, equalization techniques, and crosstalk cancellation techniques on pure CMOS applied to next generation optic, wired and wireless communication systems. In 2010 Dr. Gebara was appointed Adjunct Assistant Professor at Georgia Tech.