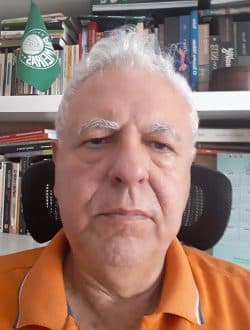 Dr. Camargo graduated from University of São Paulo, Brazil, in 1977 with an M.S. degree and in 1985 with a PhD degree both in Electrical Engineering. Before coming to the US, he was a professor and researcher at the University of Sao Paulo, from 1973 to 1993. He had sabbaticals at Centre National d’Etudes des Telecommunications in France in 1977 and in 1982. After moving to California, US in 1993, he worked at HP-Wireless Infrastructure Division in Santa Clara, on the design of front end digital radios from 13 to 39 GHz. Later he joined Fujitsu Compound Semiconductor in San Jose, working for nearly 10 years until 2004 in various projects, including: mixers (FMM5107, FMM 5116/17), LNAs (FMM5709), distributed amplifiers (FMM3900), VCOs, and Frequency Multipliers. He joined Watkins Jonhson Communications in San Jose in 2005, to work on the design of high voltage (28V) Power InGaP HBT MMICs at 2, 4, 6 and 10 W for infrastructure applications. He proposed, managed and designed MMIC linear amplifiers for Wi-Fi and Wi-Max applications (AH314 and AH315) on InGap HBT Technology. In 2007 he joined the RFMD design center in Scotts Valley where he worked in components for Cell phones. In 2009 he started working as a consultant for QuinStar, GigOptix, and Phase Matrix until December 2012. During the period January 2013 to December 2017, he worked for QuinStar in Torrance, California, on the design of several mmWave MMICs. They included PA and LNA amplifiers, mixers, filters in GaAs, InP and GaN FET type of technologies and on up/down E band converters with InP HBT technology. After 2018 he became consultant for various mmWave companies.