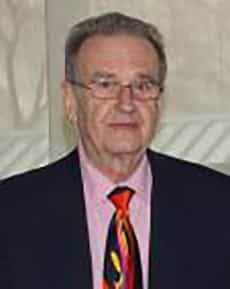 Professor Emeritus, Department of Electrical and Computer Engineering
McMaster University
John Bandler, Professor Emeritus, Department of Electrical and Computer Engineering, McMaster University, is an engineer, entrepreneur, innovator, researcher, artist, speaker, and author of fiction, including stage plays. See his YouTube channel for examples. He has published 500 technical papers, pioneered space mapping, and won several awards, including both the Microwave Application and Microwave Career Awards from IEEE MTT-S. In 1997, Hewlett-Packard acquired his company Optimization Systems Associates Inc. A Fellow of several societies, including the IEEE and the Royal Society of Canada, he has been honored by a Queen Elizabeth II Diamond Jubilee Medal. In 2016 he was appointed Officer of the Order of Canada, his citation beginning with “John Bandler has helped to put Canada at the forefront of microwave technology” and ending with “He has been a mentor to numerous highly successful students, and a strong advocate for the inclusion of more women in the field of engineering.” He mentors individuals for presentations, and is co-organizing the first ever 3MT® competition for the 2017 IEEE International Microwave Symposium.