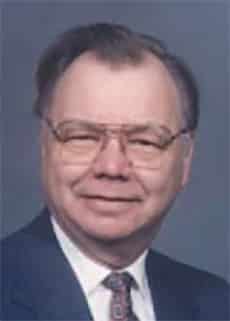 James W. Mink received the Ph.D. degree in electrical engineering from the University of Wisconsin at
Madison in 1964. From 1964–1976, he was a research physical scientist in the U.S. Army Electronics
Command, Fort Monmouth, New Jersey. His research focused on guided-wave techniques for
microwave and mm-wave communication systems. From 1976–1988, he was the associate director and
program manager in the Electronics Division. His programmatic responsibility was in the area of
“antennas and EM detection.” From 1988–1994, he was the director and interim director of the
Electronics Division of the U.S. Army Research Office (ARO), which supported an extramural research
program in electronics with research programs in the areas of solid-state electronics, opto-electronics,
information processing, electromagnetics, and mm-wave devices and systems. In this position, he was
the Army executive for electronics research and served as the principal Army member of the Joint
Services Electronics Program. In 1994, he joined North Carolina State University, where he serves as a
visiting professor in the Department of Electrical and Computer Engineering and was graduate director
from 1994–1997. His research interests are in the areas of mm-wave systems and devices, with a
primary focus upon quasi-optical mm-wave systems, and conformal antennas, with emphasis on
wireless communications. He joined the NSF as rotating scientist/engineer from 1999–2003, where he
served as a program director in the Electrical and Communications Systems Division of the Engineering
Directorate and as an expert consultant from 2004–2006. He has authored or coauthored over 90
refereed papers, book chapters, and presentations. He holds six patents.
Dr. Mink served as the editor-in-chief of MTT Transactions (1997–2000) and was a guest editor for two
special issues. He was a member of the MTT-S and the IEEE Antennas and Propagation Society (IEEE AP-
S) AdCom. He was an evaluator for ABET in both the traditional electrical engineering and nontraditional
engineering areas. He was the recipient of the Bronze Metal for the Issai Lefkowitz Award and two
Bronze Metals for Army Research and Development Achievement Awards from the Department of the
Army, the Superior Civilian Service Award from the Department of Army, the Distinguished Service
Award from the NSF, and the IEEE Third Millennium Medal and a Meritorious Service Award from the
IEEE MTT-S. He was also the recipient of the Electrical and Computer Engineering Centennial Medal from
the University of Wisconsin. He is an IEEE Life Fellow.