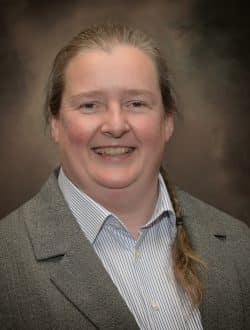 Dominique Schreurs (S’90-M’97-SM’02-F’12) received the M.Sc. degree in electronic engineering and Ph.D. degree from the University of Leuven (KU Leuven), Belgium. As post-doc fellow, she was visiting scientist with Agilent Technologies (USA), Eidgenössische Technische Hochschule Zürich (Switzerland), and the National Institute of Standards and Technology (USA). She is now full professor at KU Leuven. Her main research interests concern the nonlinear characterization and modelling of microwave and millimeter wave devices and circuits, as well as design for telecommunications and biomedical applications. Prof. D. Schreurs is serving as the first female MTT-S President (April 2018-2019). She signed up with IEEE as Student Member in 1990, and got elevated to Fellow in Jan. 2012. She serves on the IEEE MTT-S AdCom since 2009, after election by the membership-at-large. She has been serving in various roles, such as Chair of Education Committee, Chair of the Meetings and Symposia Committee, Chair of Budget Committee. She is also past chair of the MTT-S Technical Committee on ‘Microwave Measurements’ (TC-11) and vice-chair of the MTT-S Technical Committee on ‘Biological Effects and Medical Applications’ (TC-10). D. Schreurs served as Distinguished Microwave Lecturer (2012-2014) and assumed the position of Editor-in-Chief of the IEEE Transactions on Microwave Theory and Techniques (2014-2016), and Associate Editor of IEEE Microwave and Wireless Components Letters (2011-2013). Prof. D. Schreurs is also President of the ARFTG organisation (2018-2019). She is serving on the ARFTG Executive Committee since 2004, and has assumed various roles over the years. She was General Chair of the 2007, 2012, and 2018 Spring ARFTG Conferences. In 2002, she was one of the initiators and is now still co-organizer of the successful NVNA Users’ Forum. Prof. D. Schreurs also served as co-chair (2008) and TPC chair (2020) of the European Microwave Conference. She initiated the IEEE Women in Microwaves (WiM) event at the European Microwave Week in 2008 and is ever since acting as advisor for the WiM event.

Towards Greener Smartphones with Microwave Measurements

Today’s smartphone handsets offer a wide range of functions (phone, GPS, Bluetooth, WiFi, .) to customers, although are still perceived as expensive and energy consuming (requiring a daily recharge). The aim of this talk is to show how microwave measurements impact smartphone design. By optimally engineering the type of measurements made before and after design (linear, nonlinear, loadpull, modulation, .), the efficiency of the design process not only increases, but tougher specifications such as smaller form factor and lower energy consumption can be met more easily. This observation is especially valid in the design of green multi-mode wireless radios, due to the delicate balance between energy efficiency and linearity (that is, cross talk between channels).