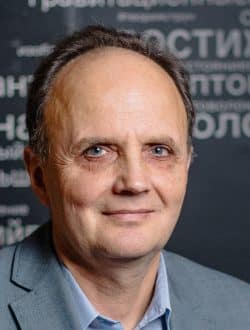 Prof. Khokhlov received the M.S., Ph.D., and Doctor of Science (Russian analogue of the Habilitaet degree in Germany) degrees from the M.V. Lomonosov Moscow State University, Moscow, Russia, in 1980, 1982, and 1992, respectively. Since 1982, he has been with the Department of Physics, M.V. Lomonosov Moscow State University, in positions from Junior Research Fellow up to Full Professor, since 1997, the Head of the Chair of General Physics, and Condensed Matter Physics, since 2006. In 2008, he was elected a Correspondent Member of the Russian Academy of Sciences. Since 2013, he is a head of the Expert Council on Condensed Matter Physics of the Russian Foundation for the Basic Research. Since 2015, he is also a head of the Expert Council on International Research Projects of the same Foundation.

Prof. Khokhlov has been active in teaching, he has developed several lecture courses for undergraduate and graduate students, supervised more than 30 MSc students and about 15 PhD thesis. His research interests include physics of narrow-gap semiconductors, development of sensitive detectors of terahertz radiation, photoelectric phenomena under terahertz excitation, organic semiconductors, and several other areas. He authored/co-authored more than 350 research/conference papers, edited 1 research monograph and filed 2 patents. He has been a principal investigator of about 15 research grants from different Russian national agencies.