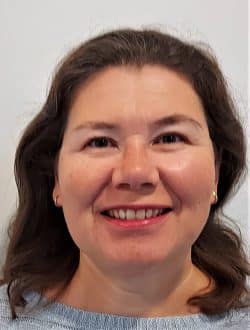 Dina O. Tymofyeyeva Seredina was born in 1969. Graduated from Kyiv State Pedagogical Institute for Foreign Languages (Kyiv National Linguistic University), Ukraine, with a degree in Teacher of Spanish, English, and Methodologist of Education in 1993; she taught the Spanish Language and Phonetics and Phonology courses at Kyiv National Linguistic University (1993-1995) and the English Language courses at Decroly College, Spain (1996-2000). In 1998, she received her Bachelor of Arts degree in International Business Administration from the University of Lincolnshire & Humberside (UK). As Head of the Administration Departments of the Wireless Communication division of Fagor Electronica (2000- 2009) and TST Systems (2010-2019), she took an active role in the preparation, management, monitoring, and audit of a vast number of European and national projects.