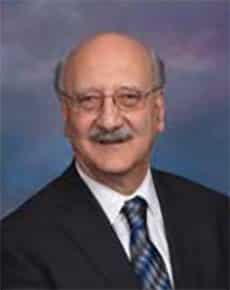 Dimitris Pavlidis has been Professor of Electrical Engineering and Computer Science (1986 to 2004) and Adjunct Professor (2004 to present) at the University of Michigan, Ann Arbor. He has been Research Professor at Boston University, Department of Electrical and Computer Engineering since 2012. In 2012 he joined the ECCS Division of the National Science Foundation as Program Director in Electronics, Photonics and Magnetic Devices (EPMD).

He has been Chaired Professor at Darmstadt University of Technology, Germany (2003 to 2011) and Director of International Relations of the Institute of Electronics, Microelectronics and Nanotechnology (IEMN), Lille, France since 2003. During 1980-1985 he was Engineer and Manager of the GaAs Monolithic Microwave Integrated Circuits (MMIC) Department of Thomson-CSF, Corbeville, France.

Professor Pavlidis was a Visiting Scientist of the Centre National d’Études des Télécommunications (CNET)/France Telecom in Bagneux, France (1993) and a Visiting Professor at the University of Hokkaido, Sapporo Japan (1992), Meijo University, Nagoya, Japan (2000) and the University of Western Australia, Perth, Australia (2000).

His research involves various types of semiconductor materials, devices, circuits, nanostructures and sensors and has applications in the electronic, optical and biological, biomedical fields. His work on heterostructure devices and materials includes the design, fabrication and characterization of III-V-based HEMT’s and HBT’s, diodes for switching and mixing, III-Niotride-based HFETs and two-terminal devices for operation extending to THz. His research also covers microwave/ millimeter-wave monolithic heterostructure integrated circuits built with such devices, MEMS and sensors based on III-Vs, II-VIis as well as Carbon Nanotubes. His materials work covers InP, III-V Nitride and II-VI (oxides) based heterostructures using Metalorganic Chemical Vapor Deposition (MOCVD) and their device applications, as well as field-emission studies. His work in the above areas has been reported in numerous papers and reports and he holds eight patents.

Professor Pavlidis was awarded in 1990 the European Microwave prize for his work in InP based monolithic integrated HEMT amplifiers. In 1991 he received the decoration of “Palmes Académiques” in the order of Chevalier by the French Ministry of Education for his work in education. In 1992 and 1999 he received the Japan Society of Promotion of Science Fellowship for Senior Scientists/Professors from the Japanese Government and in 1992 the Humboldt Research Award for Distinguished senior US Scientists. He is the recipient of the University of Michigan 1994 Electrical Engineering and Computer Science and 1996 College of Engineering Research Excellence Awards and co-recipient of the 2005 GAAS European Microwave Week Award for his work on wideband GaN-based MMIC low-noise amplifiers for transceiver frontends. He has been responsible for initiating and directing various international programs involving research and academic partnerships between European and US, Singapore and China universities. He has chaired and co-chaired several international conferences and was the General TPC Chair of the European Microwave Week, 2010.