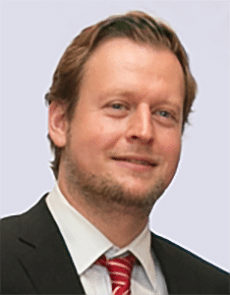 Dietmar Kissinger (S’08–M’11–SM’14) received the Dipl.-Ing., Dr.-Ing. and habil. degree in electrical engineering from FAU Erlangen-Nürnberg, Germany, in 2007, 2011 and 2014, respectively. From 2007 to 2010, he was with Danube Integrated Circuit Engineering, Linz, Austria, where he worked as a System and Application Engineer in the Automotive Radar Group. From 2010 to 2014, he held a position as Lecturer and Head of the Radio Frequency Integrated Sensors Group at the Institute for Electronics Engineering, Erlangen. From 2015 to 2018, he was with Technische Universität Berlin and Head of the Circuit Design Department at IHP, Frankfurt (Oder). Since 2019, he has been a Full Professor for High-Frequency Circuit Design at Ulm University and the Head of the Institute for Electronic Devices and Circuits. His current research interests include silicon high-frequency and high-speed integrated circuits and systems for communication and automotive, industrial, security and biomedical sensing applications. He has authored or co-authored over 300 technical papers and holds several patents. Dr. Kissinger is a member of the European Microwave Association (EuMA) and the German Information Technology Society (ITG) and Society of Microelectronics, Microsystems and Precision Engineering (VDE/VDI GMM). He currently serves as a member of the technical program committee of the European Solid-State Circuits Conference (ESSCIRC), a member of the technical program committee of the European Microwave Week (EuMW), and as the Chair of the Executive Committee of the IEEE Radio and Wireless Week (RWW). He was a two-time Chair of the IEEE Topical Conference on Wireless Sensors and Sensor Networks (WiSNet) and a two-time Chair of the IEEE Topical Conference on Biomedical Wireless Technologies, Networks and Sensing Systems (BioWireless). He further served as a member of the 2013 and 2017 European Microwave Week (EuMW) Organizing Committee and as member of the 2018 IEEE MTT-S International Microwave Symposium (IMS) Steering Committee. He was a nine-time Guest Editor for the IEEE Microwave Magazine and served as an Associate Editor for the IEEE Transactions on Microwave Theory and Techniques. He was the Chair of the IEEE MTT-S Technical Committee on Microwave and Millimeter-Wave Integrated Circuits (MTT-6) and is currently an elected member of the IEEE MTT-S Administrative Committee. He received the 2017 IEEE MTT-S Outstanding Young Engineer Award, the 2017 VDE/VDI GMM-Prize, the 2018 VDE ITG-Prize, and was the co-recipient of nine best paper awards.