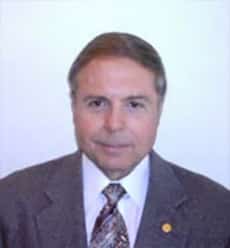 David N. McQuiddy, Jr. received the B.E.E.E. degree (magna cum laude) from Vanderbilt
University in 1960 and served as a commissioned officer in the U.S. Navy for three years. While
on active duty with the Navy, he served at sea on a radar picket submarine, an experimental
submarine, and an attack aircraft carrier. He received the M.S.E.E. degree in 1965 and the
Ph.D.E.E. in 1968 from the University of Alabama. He joined Texas Instruments (TI) in 1968
and remained there until Raytheon purchased its Defense Systems business unit in July of 1997.
Dr. McQuiddy led the monolithic microwave integrated circuits and transmit/receive modules
Virtual Technology Product Center team for the Raytheon Systems Company. In this capacity,
he had responsibility for coordinating development activities across the microwave organizations
of the three legacy companies (TI, Hughes Aircraft, and Raytheon). In January 2000, Dr.
McQuiddy joined TriQuint Semiconductor as a Vice President with responsibility for advanced
research and development. Upon transitioning to retirement, he became a part time employee of
TriQuint in July of 2003.
He has had extensive experience in applying advanced microwave technology to military
systems and had primary responsibility for the development and deployment of GaAs (gallium
arsenide) monolithic microwave integrated circuits in TI radar, missile, and electronic warfare
systems. Dr. McQuiddy has published extensively on semiconductor processing techniques;
GaAs microwave device developments, and the application of microwave technology to solidstate phased array radar systems. He is a co-holder of two patents on parametric amplifiers.
Dr. McQuiddy served as President of the Raytheon/TI Joint Venture (JV) from 1988 to 1996, a
company that was chartered to expand and enhance solid-state microwave technologies at the
parent companies by participation in the U.S. Department of Defense MIMIC programs.
Contracts valued at more than $160M were won and executed by the JV Company.
In 1994, Dr. McQuiddy organized and served as the first Chairman of the Microwave Solid-State
Electronics Division of the Electronics Industry Association (EIA). Senior technical
representatives from ten defense contractors worked together to form this new EIA division. The
Division met with Congressional representatives and the Defense Advanced Research Project
Agency (DARPA) to structure and justify the Microwave Analog Front End Technology
(MAFET) program.
He has been active in the Microwave Theory and Techniques Society (MTT-S) of the IEEE and
served as its President in 1987. He was a member of the MTT-S Administrative Committee from
1983 through 1990 and afterwards completed a three-year term as Chairman of the Awards
Committee. He was Chairman of the 1982 IEEE MTT-S International Microwave Symposium
and was Special Issue Editor for the December 1990 IEEE MTT-S Transactions. He served on
the IMS Technical Program Committee for over 20 years. Dr. McQuiddy is an IEEE Life Fellow
and a University of Alabama Distinguished Engineering Fellow. He was a Senior Principal
Fellow while at Raytheon. He received the IEEE Dallas Section Outstanding Achievement
Award and the Engineer of the Year Award in 1993 and in 2000, the Third Millennium Medal.
He is a member of Scabbard and Blade, Tau Beta Pi, Pi Mu Epsilon, Eta Kappa Nu, and Sigma
Xi honorary societies.