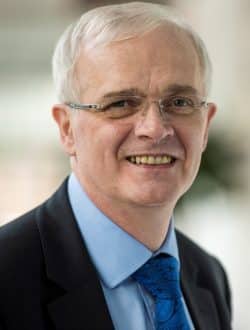 Professor Sir Christopher Snowden is an engineer with wide experience of the international microwave and semiconductor industry. He was President and Vice-Chancellor of the University of Southampton (20015-19) and previously the University of Surrey (2005-15). He was Knighted by the Queen in the 2012 New Year’s Honours for services to engineering and higher education.

He was President of Universities UK (2013-2015) and sat on the governing body of Innovate UK, the UK government’s funding body for innovation. Sir Christopher was a Member of the Council of the Engineering and Physical Sciences Research Council from 2006-12.

He has previous experience as a Non-Executive Director of several companies and acts as a consultant to several major international microwave and technology companies. He is currently Chair of the ERA Foundation.  Prior to his appointment at Surrey in 2005, Sir Christopher was Chief Executive Officer of Filtronic ICS.  He joined Filtronic plc in 1998 as Director of Technology before being promoted to Joint Chief Executive Officer in 1999.

The interest in exploring the spectrum above 100 GHz and below 10 THz is limited by the availability of suitable solid-state technologies. This presentation addresses the present state-of-the-art for active devices and integrating technologies in the range 100 GHZ to 2 THz.

State-of-the-art modeling techniques for microwave and millimeter-wave transistors are presented together with an outline of their application in process-oriented CAD. The presentation will consider MESFET, HBT, and pHEMT devices in the frequency range 900 MHz to 140 GHz.