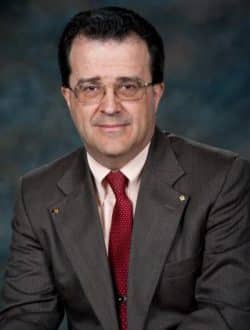 Christopher Silva Dr. Christopher P. Silva received the B.S., M.S., and Ph.D. degrees, all in electrical engineering from the University of California at Berkeley. His graduate training was in nonlinear circuit and system theory, with work focusing on the qualitative analysis and analytical detection of chaotic dynamics, such as in second-order analog phase-locked loops.

Dr. Silva joined the Electronics Research Laboratory of the Aerospace Corporation, Los Angeles, California, in 1989 and is currently a Senior Engineering Specialist in the Communication Electronics Department, Communications and Cyber Division. He has been the principal investigator on several internally funded research projects addressing nonlinear microwave CAD, private/secure communications and radar by means of chaos, nonlinear stability analysis/design of microwave circuits, and the measurement, specification, modeling and compensation of nonlinear, high data rate satellite communications channels in support of military space programs. He has given many invited talks at conferences, society meetings, universities, industry, and laboratories on the applications of nonlinear techniques to communications and signal processing, along with corresponding publications in various venues. He has also co-organized several workshops and co-instructed a regularly offered short course for the International Microwave Symposium on nonlinear related topics.

Dr. Silva is an IEEE Fellow (1999), a Senior AIAA member (1999), and an AMS and SIAM member. He is also an active technical committee member in the IEEE MTT-S, and has served as an Associate Editor for the Transactions on Circuits and Systems (2002–2004). More recently, Dr. Silva has become an active member of two IEEE Standards Working Groups chartered to arrive at best practices for nonlinear distortion metrics and measurements.

This presentation introduces and describes new and highly accurate time-domain measurement and modeling techniques applicable to nonlinear communications components and systems with bandwidths ranging to several GHz. An overview and comparison of time-domain versus frequency-domain measurements as they pertain to nonlinear components and systems will first be given. The development of baseband time-domain measurement techniques and system will next be covered that provides state-of-the-art measurement accuracies of time-domain waveforms critical to design verification, model construction/validation with operational modulated signals, and system troubleshooting. A survey of some common frequency-domain blackbox modeling approaches will then be described, followed by the introduction of a new systematic approach, called the poly-spectral method, that is based on the time-domain input/output measurements involving operational modulated signals. A more detailed summary of this talk is available upon request.