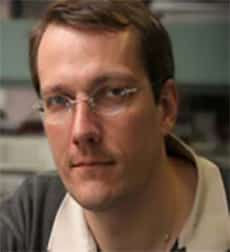 Christophe Caloz was born in Sierre, Valais, Switzerland, in 1969. He received the Diplôme d’Ingénieur en Électricité and the Ph.D. degree from École Polytechnique Fédérale de Lausanne (EPFL), Switzerland, in 1995 and 2000, respectively. From 2001 to 2004, he was a Postdoctoral Research Engineer at the Microwave Electronics Laboratory of University of California at Los Angeles (UCLA), where he conducted research on microwave devices, antennas and systems, EBG structures and electromagnetic metamaterials. In March 2004, he was the recipient the UCLA Chancellor’s Award for Postdoctoral Research “for exceptional accomplishments in research.” In June 2004, Dr. Caloz joined École Polytechnique of Montréal, where he is now an Associate Professor, a member of the Microwave Research Center Poly-Grames, and the holder of a Canada Research Chair (CRC) entitled “Future Intelligent Radio-frequency Metamaterials” (FIRMs), associated with a novel Canadian Foundation for Innovation (CFI) infrastructure. He is also the holder of the NSERC (Natural Sciences and Engineering Research Council) Strategic Project Grant “Novel Ultra-Wideband (UWB) Front-End Transceiver Systems.”

Dr. Caloz has authored and co-authored over 160 technical conference, letter and journal papers, among which 35% were invited papers (over 45% of conference papers), and he holds several patents. He has authored the first unified textbook on metamaterials, which is entitled Electromagnetic Metamaterials: Transmission Line Theory and Microwave Applications (Wiley and IEEE Press, 2005). In addition, he has authored three book chapters: “Microwave Coupler and Resonator Applications of Negative-Index Planar Structures” (in Electromagnetic Metamaterials: Physics and Engineering Aspects, John Wiley and Sons, 2006), “From Bragg Structures to Micro-Engineered Materials,” (in Periodic Structures,” Research Signpost, 2006), “Composite Right/Left-Handed Metamaterial Antennas,” (in Handbook of Metamaterials, to be published). Dr. Caloz is a Senior Member of the IEEE and a Member of the Microwave Theory and Techniques Society (MTT-S) Technical Coordinating Committee (TCC) MTT-15.

He was the Guest Editor of the March-April 2006 special issue on metamaterials in the International Journal for Numerical Methods (IJNM). He is currently a member of the Editorial Board of the IJNM, of the International Journal of RF and Microwave Computer-Aided Engineering (RFMiCAE) and of the journal Metamaterials created by the Metamorphose Network of Excellence. In addition, he is serving as a reviewer for many journals, including the Transactions on Microwave Theory and Techniques, the Microwave and Wireless Component Letters, the Transactions on Antennas and Propagation, the Applied and Wireless Components Letters, the Electronic Letters, the Journal of Applied Physics, the Applied Physics Letters, the Journal of Optics, the New Journal of Physics, and other international periodicals. He has also participated in 15 courses, tutorials and workshops around the world over the last three years, and he has organized several focused sessions and workshops at international conferences. Dr. Caloz is the TPC Chair of the next International Symposium of Signals and Systems (ISSSE) which will be held at École Polytechnique, Montréal, from July 30 – August 2, 2007. His current research interests include novel metamaterials for millimeter-wave and optical applications¸ nonlinear and active devices, thin-film/bulk ferroelectric and ferromagnetic components, ultra-wideband (UWB) systems, terahertz technology, and numerical methods.