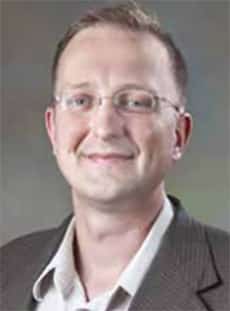 Chris Rodenbeck joined the US Naval Research Laboratory in January 2015 where he is currently standing up a new department focused on millimeter-wave radar applications. From 2004 to 2014, Chris led a multidisciplinary advanced/exploratory technology development program for radar and sensor applications at Sandia National Labs. The principle goal of this program was to consolidate >800 discrete radar components into a handful of custom ICs. The success of this work was twice the subject of Congressional testimony by Sandia’s President. In addition, Chris led the development of a 50-W single-chip radar power amp with TriQuint Semiconductor. This is the first PA to feature an integrated drain modulator, and it exhibits the fastest pulse modulation ever reported at power levels > 10 W.

Dr. Rodenbeck received an internal citation for “Excellence in Radar Technology Leadership” in 2011 and was the Principal Investigator for an R&D program receiving the prestigious 2012 NNSA Award of Excellence. He received a corporate-wide Innovator Award in 2013. He is an Associate Editor of the Encyclopedia of Electrical and Electronics Engineering (New York, NY, USA: Wiley), responsible for the Microwave Theory and Techniques subject area.

Chris has mentored numerous engineers in the radar electronics application area. His published activities include the design of SOI-CMOS and GaAs RFICs, LTCC multichip modules, UWB radar transceivers, antennas from UHF through millimeter wave, microwave power combining, radiation effects in electronics, and semiconductor device modeling. During the summers of 1998, 1999, and 2000, he was with TriQuint Semiconductor, Dallas, TX, as an Intern in the MMIC design group. He has authored or coauthored 29 refereed journal papers, 6 patents (with 10 more currently in process), 18 conference papers, and 19 government reports. Dr. Rodenbeck’s graduate studies at Texas A&M University were supported by fellowships from NASA, the State of Texas “to advance the state of the art in telecommunications,” Texas A&M, and TxTEC in addition to grants from Raytheon, TriQuint Semiconductor, the Office of the Secretary of Defense, NASA Jet Propulsion Lab, NASA Glenn Research Center, and the US Army Space Command.