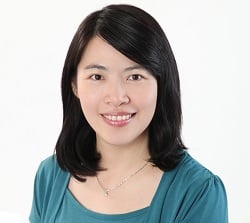 Chia-Chan Chang is a Professor in the Department of Electrical Engineering at National Chung-Cheng University, Chiayi, Taiwan. She also holds a joint-appointment with the Dept. of Communications Engineering. Chia-Chan received a B.S. from National Chiao-Tung University (Hsinchu, Taiwan) in 1995, and M.S. and Ph.D. degrees in Electrical and Computer Engineering from the University of California at Davis (Davis, CA, USA) in 2001 and 2003, respectively. From 1995 to 1997 she worked at National Chiao-Tung University as a full-time teaching assistant. During 2017-2018 she was a visiting scholar at the University of Florida (Gainesville, FL, USA).

Chia-Chan’s research interests span both circuit designs and system applications. In the circuit arena, the study includes antenna designs, array beamforming technologies, microwave/millimeter-wave integrated circuits, and reconfigurable CMOS-MEMS circuits. In the system arena, she has focused on the development of radar systems, particularly in bio-sensing and positioning.

Chia-Chan served as vice chair of IEEE MTT Tainan Chapter from 2010 to 2012. She served as Track Chair in 2016 International Women in Engineering Conference on Electrical and Computer Engineering (WIECON-ECE) and TPC member in numerous conferences, including Radio and Wireless Symposium (RWS) (since 2009~), 2016 RFIT, and 2020 International Microwave Symposium (IMS). Currently, she is serving as Associate Editor of IEEE Sensors Letters.