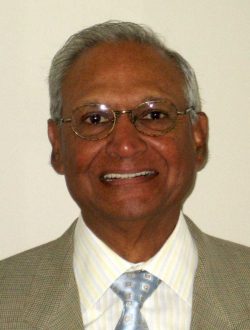 Chandra received undergraduate degrees in Physics and Engineering in India and post graduate degrees in Canada. He joined RCA in Montreal in 1967, where he worked on the design and implementation of microwave equipment for communications satellites. In 1976, he joined COM DEV as a partner and retired as Chief Scientist. His technical leadership helped COM DEV grow from a small company to a world leader having supplied microwave equipment to over 900 satellites. In 1996, COM DEV became a publicly listed company on the Toronto Stock Exchange. The company was sold to Honeywell in 2016.

Dr. Kudsia is a Fellow of IEEE, AIAA (American Institute of Aeronautics and Astronautics), CAE (Canadian Academy of Engineering), EIC (Engineering Institute of Canada) and IETE (Institute of Electronics and Telecommunication Engineers, India).He has received many awards and honours, including the “A.G.L. McNaughton Award & Medal,” the highest honour given by the IEEE in recognition of outstanding contribution to Electrical or Electronic Engineering in Canada. In 2005, he received the Aerospace Communications Award, presented for outstanding contributions in the field of aerospace communications. Sponsored by the AIAA, this award is one of the most prestigious honours bestowed in satellite industry.

Dr. Kudsia has published extensively and is the co-author of three books. Second edition of the book, Microwave Filters for Communication Systems by Cameron, Kudsia and Mansour was published by Wiley in April, 2018. He has taught graduate courses at Universities in Canada and Spain, given many talks at various MTT-S symposiums and Communication Satellite Systems conferences. He has served on many national committees and boards of non-profit research institutes including the editorial board of IEEE-MTT.

Dr. Kudsia received an Honorary Doctor of Science from McMaster University in 2013.

He currently holds the position of adjunct professor at the University of Waterloo and serves on the Dean’s advisory board of McMaster University.

The lecture begins with a simple model of a wireless communication system. It addresses the issues of radio spectrum and its utilization, regulatory constraints and the interference environment. This is followed by the characterization of a typical communication channel, constraints imposed by the operating environment, highlighting the cost sensitive parameters of the RF equipment comprising the system. The impact of system design on the requirements and specifications of various filters and multiplexers used in communication systems is then described in depth. The talk concludes with an overview of the state-of-the-art for microwave filters and multiplexing networks for satellite and wireless communication systems. It includes personal stories and anecdotes that reflect author’s lifetime experience in the field of satellite communications and microwave filter and multiplexer technology.

Starting in early 1970s, the advent of commercial satellite communications spurred unprecedented research and development activity in the field of microwave technologies worldwide. It demanded technological advances to reduce the mass and volume of the communications payload and, at the same time, more efficient delivery of higher effective isotropic radiated power (EIRP) to the ground stations. One area most dramatically impacted has been that of microwave filters and multiplexers.

This talk provides the historical evolution of microwave filter technologies since the inception of communication satellite systems. It also provides a glimpse of the new directions for the technology for the emerging flexible payloads being proposed for the upcoming satellite systems. The talk is sprinkled with personal stories and anecdotes that reflect author’s lifetime experience in the field of satellite communications and microwave filter and multiplexer technology.