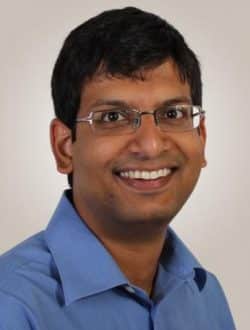 Arun Natarajan (M’07) Arun S. Natarajan received the B.Tech. degree from the Indian Institute of Technology, Madras, India, in 2001, and the M.S. and Ph.D. degrees from the California Institute of Technology, Pasadena, CA, USA, in 2003 and 2007, respectively, all in electrical engineering. From 2007 to 2012, he was a Research Staff Member with IBM T. J. Watson Research Center, Yorktown Heights, NY, USA, and worked on millimeter-wave (mm-wave) phased arrays for multi-Gb/s data links and airborne radar and on self-healing circuits for increased yield in submicron process technologies. In 2012, he joined Oregon State University, Corvallis, OR, USA, as an Assistant Professor in the School of Electrical Engineering and Computer Science. His current research is focused on RF, mm-wave and sub-mm-wave integrated circuits and systems for high-speed wireless communication and imaging. Dr. Natarajan was the recipient of the National Talent Search Scholarship from the Government of India [1995–2000], the Caltech Atwood Fellowship in 2001, the IBM Research Fellowship in 2005, the 2011 Pat Goldberg Memorial Award for the best paper in computer science, electrical engineering, and mathematics published by IBM Research, the CDADIC Best Faculty Project Award in 2014 and 2016, the NSF CAREER award in 2016 and the Oregon State University Engelbrecht Young Faculty Award in 2016. He serves on the Technical Program Committee of the IEEE Intl. Solid-State Circuits Conference (ISSCC), IEEE Radio-Frequency Integrated Circuits Conference (RFIC) and is also an Associate Editor of the IEEE Transactions on VLSI Systems.