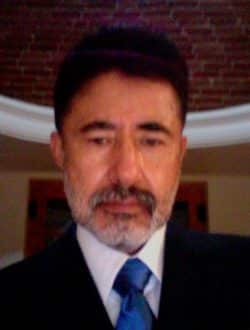 Prof. J. Apolinar Reynoso-Hernández (AM’92-M’2003) received his Electronics and Telecommunications Engineering degree, M. Sc. degree in Solid State Physics and Ph. D. degree in Electronics, from ESIME-IPN, Mexico, CINVESTAV-IPN, Mexico, and Université Paul Sabatier-LAAS du CNRS, Toulouse, France, in 1980, 1985, and 1989, respectively. His doctoral thesis was on Low-frequency noise in MESFET and HEMTs. Since 1990, he has been a researcher at the Electronics and Telecommunications Department of CICESE in Ensenada, B. C., Mexico.

His specific current research interests include high-frequency on-wafer measurements, high-frequency device modeling, linear and nonlinear device modeling, and high-efficiency power amplifiers. Among the most outstanding contributions of Prof. Reynoso-Hernández and his research group to the theory of VNA calibration techniques are developing the LZZ calibration technique and the generalized theory of the TRM calibration technique. He has authored or co-authored over 50 refereed journal articles and international conference papers. He has contributed to more than 15 publications at the ARFTG and led CICESE’s, Microwave group to obtain the best interactive forum paper award five times. He has served as a reviewer and TPC member of ARFTG conference, as an Executive committee member of ARFTG, and as ARFTG-MTT Workshop organizer. Prof. Reynoso-Hernández served the IEEE as a reviewer for the IEEE TRANSACTIONS MICROWAVE THEORY AND TECHNIQUES, IEEE MICROWAVE AND WIRELESS COMPONENTS LETTERS and a reviewer of the European Microwave Conference (EuMC). Since 1990 Prof. Reynoso-Hernández has been a member of the Mexican National System of Researchers (SNI), currently holding level II/III.