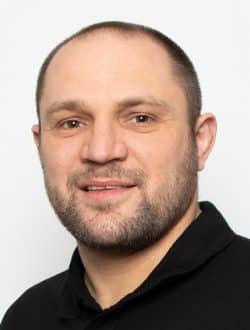 Anthony Ghiotto (S’05-M’09-SM’15) received the M.Sc. and Ph.D. degrees (both with distinction) in optics, optoelectronics, and microwave engineering from the Grenoble Institute of Technology, Grenoble, France, in 2005 and 2008, respectively. From 2009 to 2012, he has held a Post-Doctoral Research Associate position at the École Polytechnique de Montréal, Montréal, QC, Canada. In 2012, he joined the Department of Electronics of the ENSEIRB-MATMECA engineering school from the Bordeaux Institute of Technology and the Laboratory of Integration from Materials to Systems (IMS) from the University of Bordeaux, where he is currently an Associate Professor (with Full Professor habilitation). In 2016 and 2017, he has been a Guest Professor at the University of Pavia, Pavia, Italy. He was a recipient of the IEEE MTT-S Outstanding Young Engineer Award in 2022, the IEEE/SEE Léon-Nicolas Brillouin Award in 2020, the IEEE SPI Young Investigator Training Program Award in 2016 and 2017, the Post-Doctoral Fellowship from the Merit Scholarship Program for Foreign Students of the Fonds Québécois de la Recherche sur la Nature et les Technologies of Québec in 2009, and the Young Scientist Award of the International Union of Radio Science in 2008. His current research interests include the analysis, design and integration of microwave and millimeter wave passive and active circuits in PCB (including SIW and Air-Filled SIW), dielectric waveguides, BiCMOS and CMOS technologies.

Dr. Ghiotto was the TPC Chair of the 2019 European Microwave Conference (EuMC). He is an Associate Editor of the EuMA International Journal of Microwave and Wireless Technologies and a technical reviewer for the IEEE Transaction on Microwave Theory and Techniques, IEEE Transaction on Antenna and Propagation, IEEE Microwave and Wireless Components Letters and the IEEE Antennas and Wireless Propagation Letters. Dr. Ghiotto is the vice-chair of the MTT-4 Microwave Passive Components and Transmission Line Structures and a member of the MTT technical Coordination and Future Directions Committee (TCFDC), the MTT-1 Field Theory and Computational EM, and the MTT-5 Filters Committees of the IEEE Microwave Theory and Technique Society (MTT-S). Since 2017, he is the chair of the IEEE MTT French chapter. He was the Counselor of the IEEE Student Branch of Bordeaux: the BEE Branch, from 2012 to 2019, and is the advisor of the MTT and AP BEE Branch Chapters. He was a Member of the Organization Committee of the 2015 European Microwave Week and the 2015 French National Microwave Days.

Introduced in the early 2000s, the substrate integrated waveguide (SIW) technology, has trigged a huge interest from academia to industry with the focus on the design and development of low-loss, compact, integrated, self-packaged and low-cost microwave and millimeter-wave circuits, antennas and systems. However, the classical metallic waveguide technology, which offers better performances such as lower insertion loss and higher power handling, has still been used in the design of microwave and millimeter-wave systems, despite its higher cost and bulky structure. To offer a highly integrated, further loss-reduced, low-cost alternative to the conventional waveguide and also to allow a wide-spread use of the millimeter-wave spectrum, a new SIW structure called Air-Filled SIW (AFSIW) has been introduced. This new structure has been theoretically and experimentally studied in details with a substantial amount of results. At millimeter wave frequencies, compared to the SIW topologies, the proposed AFSIW scheme exhibits a substantially lower insertion loss (three times at Ka-band, for example) and a much higher average power handling capability (four times, at Ka-band for example). Numerous AFSIW passive components have been investigated designed and demonstrated, which take advantages of the well-established multilayer printed circuit board (PCB) fabrication process. Couplers, phase shifters, power dividers, antennas and filters have been modeled, designed, prototyped and measured based on the introduced technology. Their performances have theoretically and experimentally been compared with their SIW counterparts to demonstrate and validate the benefits of the proposed technology.