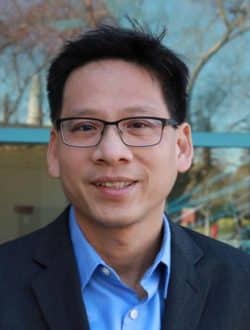 Anh-Vu Pham received the B.E.E. (with highest honors), M.S., and Ph.D. degrees in electrical engineering from the Georgia Institute of Technology, Atlanta, in 1995, 1997, and 1999, respectively. From 1999–2002, he held a faculty position at Clemson University. He joined the University of California at Davis in 2002 and is currently an associate professor, and he leads the Microwave Microsystems Lab, which has been supported by DARPA, NSF, AFRL, and numerous companies for research on RF and mm-wave frequency organic packages and multichip modules, RF CMOS circuits, and wireless sensors. Recently, his group has focused on developing organic packages and modules that can provide hermeticity and reliability as ceramic counterparts. He has published over 90 peer-reviewed papers, several book chapters, and one book in print. Dr. Pham has served as the chair of IEEE MTT-S Technical Coordinate Committee on Microwave and Millimeter Packaging (2003–2006) and is currently the vice chair of the IEEE IMS Technical Committee (TC) on Power Amplifiers and Integrated Devices. He received the National Science Foundation (NSF) CAREER Award in 2001. He is a Senior Member of the IEEE. In 1997, Dr. Pham cofounded RF Solutions, a fabless semiconductor company providing RFICs for WiFi applications. In April 2003, Anadigics Inc. acquired RF Solutions. In 2008, he cofounded Planarmag, Inc., a company specializing in electromagnetic components for data communications applications (Ethernet, DSL, etc.) and serves as the CTO.