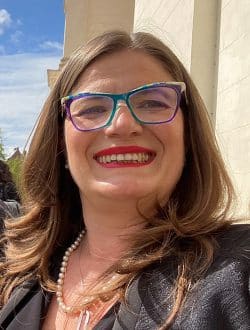 Since 1998, she has been with STMicroelectronics, Crolles, France, now Technology R&D Fellow. Her focus areas are in the design of RF/mmW/THz and ultra-low-power circuits and systems. She is currently leading the RF Affinity team transversal inside the company, which enables knowledge creation and breakthrough solutions in the field towards open innovation and business impact.

Andreia is very active in the IEEE community since more than 15 years, strongly implied with SSCS and its Adcom, the Executive Committee of VLSI Symposium and has been the TPC chair of ESSCIRC 2020 and 2021 in Grenoble. She is as well IEEE RFIC Symposium TPC member, and has been for 10 years involved with ISSCC as RF subcommittee chair and then member of the Executive Committee. She is as well a founding member of the IEEE SSCS Women in Circuits group.

Andreia has authored or co-authored 150+ technical papers and 14 book chapters, has co-edited the Springer book “The Fourth Terminal, Benefits of Body-Biasing Techniques for FDSOI Circuits and Systems” and has filed more than 25 patents.

Andreia has been recipient and co-recipient of several awards with ISSCC and RFIC. She is as well the winner of the 2012 STMicroelectronics Technology Council Innovation Prize, and has been awarded an Honorary Doctorate from the University of Lund, Sweden, promotion of 2020.