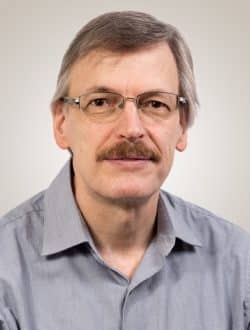 Andreas Weisshaar (S’90–M’91–SM’98–F’06) received the Dipl.-Ing. degree in electrical engineering from the University of Stuttgart, Stuttgart, Germany, in 1987, and the M.S. and Ph.D. degrees in electrical and computer engineering from Oregon State University, Corvallis, OR, USA, in 1986 and 1991, respectively.  In 1991, he joined the Department of Electrical and Computer Engineering (now School of Electrical Engineering and Computer Science) at Oregon State University, where he is currently a Full Professor and the Director of the Center for Design of Analog-Digital Integrated Circuits (CDADIC). From 2008 to 2011 he served as Program Director for Communications, Circuits, and Sensing-Systems with the U.S. National Science Foundation.