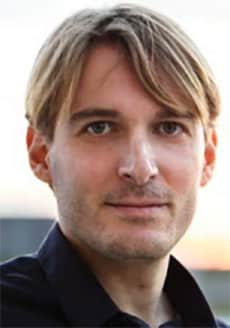 Andrea Alù is an Associate Professor and the David & Doris Lybarger Endowed Faculty Fellow in Engineering at the University of Texas at Austin. He received the Laurea, MS and PhD degrees from the University of Roma Tre, Italy, respectively in 2001, 2003 and 2007. After spending one year as a postdoctoral researcher at the University of Pennsylvania, in 2009 he joined the UT Austin faculty, where he is also a member of the Applied Research Laboratories and of the Wireless Networking and Communications Group. He is the co-author of one edited book, over 230 journal papers, 22 book chapters, and 380 conference papers, spanning over a broad range of research topics, including metamaterials and plasmonics, electromagnetic theory and applications, microwave and RF circuits and antennas, optics and photonics, acoustics, scattering, cloaking and transparency, nanocircuits and nanostructures modeling, miniaturized antennas and nanoantennas. Dr. Alù is currently on the Editorial Board of Scientifc Reports and Advanced Optical Materials, he serves as Associate Editor of the IEEE Antennas and Wireless Propagation Letters and of Optics Express and has guest edited special issues for the IEEE Journal of Selected Topics in Quantum Electronics, for Optics Communications, for Metamaterials and for Sensors on a variety of topics involving metamaterials, plasmonics, optics and electromagnetic theory. Over the last few years, he received several research awards, including the OSA Adolph Lomb medal (2013), the IUPAP Young Scientist Prize in Optics (2013), the Franco Strazzabosco Award for Young Engineers (2013), the URSI Issac Koga Gold Medal (2011), the SPIE Early Career Investigator Award (2012), an NSF CAREER award (2010), the AFOSR and the DTRA Young Investigator Awards (2010, 2011). He has been serving as OSA Traveling Lecturer since 2010 and as the IEEE joint AP-S and MTT-S chapter for Central Texas. He is a fellow of IEEE and OSA, and a full member of URSI. Dr. Alù’s achievements in the feld of microwave, optical and acoustic metamaterials are numerous. As examples, he published a number of seminal papers on cloaking and invisibility, including the frst experimental demonstrations of 3-D cloaking in free-space, based on free-standing plasmonic and mantle cloaks for microwave signals. He also introduced pioneering concepts to model the anomalous scattering, propagation and guiding features of metamaterials, as well as the concepts of lattice-induced chirality in twisted metamaterials and of angular-momentum bias to induce giant nonreciprocity without magnetic efects, a concept recently appeared on the cover of Science magazine. His recent book Optical Antennas, from Cambridge University Press, serves as a reference for scientists and engineers studying nanoparticles serving as a bridge between nanoscale signals and far-feld radiation.