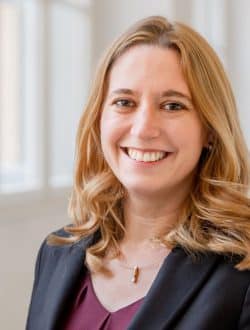 Prof. Amelie Hagelauer received the Dipl.-Ing. degree in mechatronics and the Dr.-Ing. degree in electrical engineering from Friedrich-Alexander-University Erlangen-Nuremberg, Erlangen, Germany, in 2007 and 2013, respectively. In November 2007, she joined the FAU Institute for Electronics Engineering, where she researched on BAW resonators and filters toward her Ph.D. degree. Since 2013, she has been focusing on SAW/BAW and RF MEMS components, as well as on microwave integrated circuits for frontends. From 2016 to 2019, she had been leading a Research Group on electronic circuits and from August 2019 to September 2021 she was Full Professor at the University of Bayreuth, Germany. In September 2021, she has joined the Technical University Munich as Full Professor and became the Co-Director of the Fraunhofer Research Institution for Microsystems and Solid State Technologies EMFT. She has been engaged in research and development of microwave theory and technology, electronic circuits and systems, and communication and sensing systems. In these fields, she has authored or coauthored more than 140 peer-reviewed publications. She acted as a Guest Editor for a special issue of the IEEE Transactions on Microwave Theory and Techniques on the topic RF Frontends for Mobile Radio and is now an Associate Editor of the IEEE Transactions on Microwave Theory and Techniques.