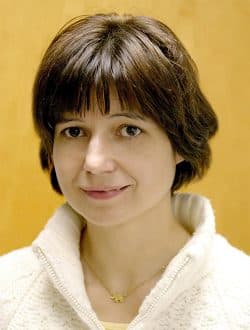 Almudena Suárez is a full professor at University of Cantabria (Spain) and head of the research group Microwave Engineering and Radiocommunication Systems. She is a Fellow member of the IEEE. She was also an IEEE Distinguished Microwave Lecturer during the period 2006-2008. She has published more than 80 papers in IEEE journals and 59 papers in IEEE Transactions on Microwave Theory and Techniques. She has authored the book “Analysis and design of autonomous microwave circuits” (IEEE-Wiley, 2009) and co-authored the book “Stability Analysis of nonlinear microwave circuits” (Artech House, 2003). She has given numerous invited talks in international conferences. She is a member of the technical programme committees of “IEEE International Microwave Symposium” and “European Microwave Week”, among other. She is a member of the Board of Directors of the European Microwave Association, where she acts as publication chair. She was the Editor in Chief of “International Journal of Microwave and Wireless Technologies” of Cambridge Journals, from 2013 to 2018. She is an associate editor of IEEE Microwave Magazine. She was the General TPC chair of EuMW 2019. She was the coordinator of the “Communications and Electronic Technology Area” for the Spanish National Evaluation and Foresight Agency (ANEP) between 2009 and 2013. She was the co-chair of the 2014 and 2015 editions of “IEEE Topical Conference on RF/microwave Power Amplifiers (PAWR)”, in Newport Beach and San Diego. She has been the co-instructor of a regularly offered short course for the International Microwave Symposium on nonlinear related topics.

Power amplifiers often exhibit instabilities giving rise to frequency division by two or oscillations at incommensurate frequencies. These phenomena, observed from a certain level of input power, cannot be detected through a small-signal stability analysis of the circuit. Instead, a large-signal stability analysis must be performed. Other behaviors, like hysteresis and chaotic solutions, can also be obtained when the input power is varied. The qualitative changes in the output-power spectrum are due to bifurcations or qualitative stability changes in the circuit solution or in the number of solutions when the parameter is varied. The talk introduces the local and global stability concepts and the analysis techniques, based on harmonic balance. The first objective is to allow a good comprehension of the different phenomena. The second objective is to provide practical simulation tools for an efficient prediction and elimination of the undesired behavior. Different approaches for the local-stability analysis of nonlinear regimes will be presented, with emphasis on the pole-zero identification. Then, techniques will be shown for the detection of the most common types of bifurcations in power amplifiers. The final goal will be the stabilization of the circuit and the design corrections in order to suppress the undesired phenomena will also be presented.

For illustration, the simulation tools will be applied to two different switching amplifiers developed at California Institute of Technology. These amplifiers have remarkably high efficiency, but in intermediate input-power range they exhibited different undesired phenomena. The first amplifier is a Class-E/F amplifier, which showed oscillations, hysteresis and chaos. The second amplifier is a Class-E amplifier, which showed jumps in the power-transfer curve and sideband noise amplification. After the application of the different techniques, the two amplifiers were globally stabilized for all the expected operating values of the amplifier bias voltage and input power. This was achieved with negligible degradation of the amplifier performance, in terms of output power and drain efficiency. The stable behaviour obtained in simulation was experimentally confirmed.