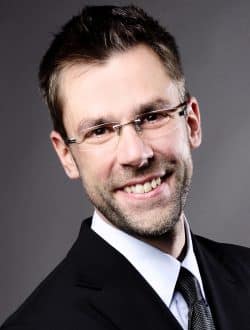 From 2005 to 05/2017 he was with the Institute for Electronics Engineering, FAU, Germany. From 2007 to 2010 he has been team leader, from 2010 to 2015 group leader Circuits, Systems and Hardware Test and since 2015 leader of the group Electronic Systems. From 06/2017 to 02/2020 he was professor and head of the chair for Electronics and Sensor Systems with the Brandenburg University of Technology Cottbus-Senftenberg, Germany. Since 03/2020 he is with Hamburg University of Technology, Germany as professor and head of the Institute of High-frequency Technology.

Alexander Koelpin’s research interests are in the areas of microwave circuits and systems, radar and wireless sensing, wireless communication systems, local positioning, and six-port technology. He has authored or co-authored more than 300 publications in his areas of interest. Furthermore, he serves as a reviewer for several journals and conferences, has been chair of the IEEE MTT-S technical committee MTT-24 form 2018 to 2020, since 2018 elected member and since 2020 vice chair of the IEEE MTT-S/AP German Chapter Executive Board, member of the Commission A: Electromagnetic Metrology of U.R.S.I., and from 2012 to 2017 conference Co-Chair of the IEEE Topical Conference on Wireless Sensors and Sensor Networks. In 2016 he has been awarded the IEEE MTT-S Outstanding Young Engineer Award and in 2017 with the ITG Award of the German VDE.