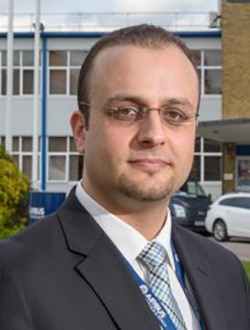 Alaa Abunjaileh has a First Class Honours degree and PhD degree in Microwave Engineering from the University of Leeds, UK. Between 2005-2011 he was a Research Fellow at the University of Leeds where he was involved in industrial and academic projects with UK Department of Trade and Industry (DTI), TDK Europe and Selex Galileo. In 2011 he moved to Airbus Defence and Space as Principal Engineer, he has been working on the design and development of next generation communications satellites front/end systems, and represents Airbus by working with Satellite operators on future multimillion dollar satellite missions. The process involves technical planning and negotiations.

Dr. Abunjaileh was the Operations Director for EuMW2011 in Manchester, he was the Finance Chair for the first IEEE MTT-S Conference in India, IMaRC 2013, IMaRC2014 and General Chair for IMaRC2015/2017. He was the TPC Chair for EuMIC2016 in London. He has published papers in the IEEE MTT Conferences, MTT Transactions, Microwave Magazine and Microwave Letters. He is a Chartered Engineer and Senior Member of the IEEE.