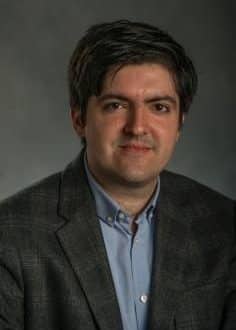 Cagri Ulusoy received his B.Sc. and M.Sc. degrees from Istanbul Technical University in 2005, and from Ulm University in 2008, respectively. He acquired his doctoral degree, suma cum laude, in 2012 from Ulm University. From 2012 to 2015, he was with the Georgia Institute of Technology as a research engineer, from 2015 to 2016 he was a group manager at IHP. In 2016 he joined the Michigan State University as an assistant professor.
Dr. Ulusoy is the recipient of the best student paper award in the Radio Wireless Symposium, 2011 and the second place in the best student paper competition in the International Microwave Symposium, 2011. His dissertation was distinguished with the Suedwestmetall “Young Scientist” award. He acts as an associate editor for IEEE MWCL and RFIC VJ. He has authored/co-authored more than 70 publications in the field of broadband and mm-wave ICs for sensing and communication systems.