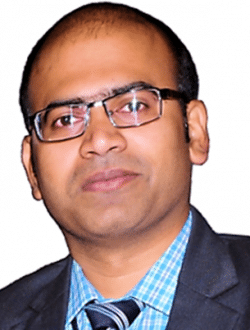 Abhishek Kumar Jha (S’14–M’17) received the Ph.D. degree in RF and microwaves from Indian Institute of Technology (IIT) Kanpur, India, in 2017. He was a Post-Doctoral Research Fellow with the Institute of Photonics and Electronics, Prague, Czechia. In 2018, he joined the Department of Microwave and Antenna Engineering, Gda´nsk University of Technology (GUT), Gda´nsk, Poland, as an Assistant Professor. Since 2021, he has been associated with the Department of Electrical Engineering as a Faculty of RF and Microwave Engineering at IIT Tirupati, India. He has authored/co-authored more than 50 articles in peer-reviewed international journals and conference proceedings, one patent, one technical report and one book chapter. His current research interests include the numerical analysis and design of novel microwave circuits and components, development of RF and microwave sensors for nondestructive testing, and measurements of intrinsic and physical properties, epsilon-near-zero and mue-near-zero devices, metamaterials, metasurfaces and their applications, 3D-printed/inkjet-printed RF devices, wireless and flexible RF sensors.

Dr. Jha received several awards, including the highly prestigious Microwave Graduate Fellowship Award bestowed for the excellence in research and academics by IEEE MTT-S during IMS 2015, the Second and Third Prizes in the IEEE SIGHT DESIGN contest organized by the IEEE MTT and AP Societies in 2015, the Gandhian Young Technological Innovation Award 2016 under the Technological Edge category worth of 1.5M INR at the President’s Estate, New Delhi, India, a prominent Young Scientist Grant 2016 from Department of Science & Technology, Government of India, highly competitive IDUB Premium Award 2020 by the Rector of GUT Poland, ‘Alumni in Focus’ from IIT Kanpur in 2020, the Institute Fellowship 2012-2016 and the MHRD Fellowship 2009-11 for pursuing the Ph.D. and M.Tech. programs, respectively, and two successive University Gold Medals for being first in the first class of M.Tech. (Hons.) and B.E. (Hons.) degrees in 2011 and 2009, respectively.