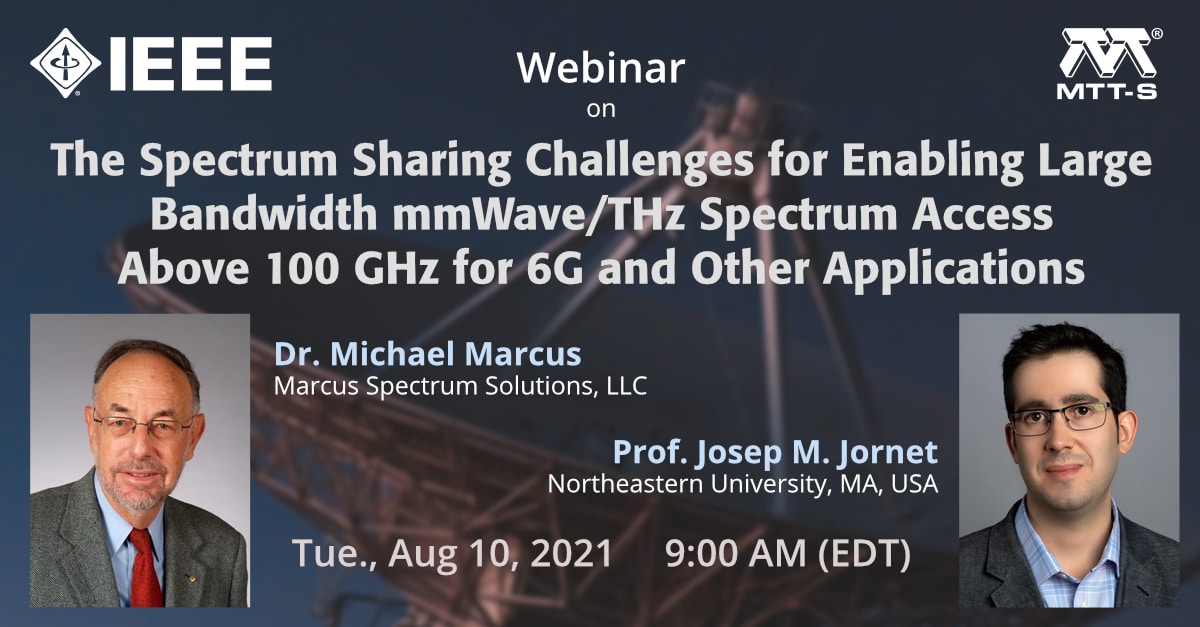 Abstract: Spectrum above 100 GHz is attractive for applications needing contiguous bandwidths greater than 20 GHz such as alternatives for optical fiber in situations where time urgency or difficult terrain make the low material cost fiber alternative infeasible. But unlike in the lower spectrum, above 100 GHz there is a high density of passive bands due to the presence of many molecular resonances of critical interest to climate scientists and radio astronomers. When the ITU created most of these bands in 2000, at the request of both US and European countries, it also agreed to their requested review of whether carefully controlled sharing of such passive bands was feasible. This webinar will review the technical challenges and potential benefits for sharing such bands subject to ITU quantitative protection goals that are in place. While such sharing is probably not feasible in lower bands, the key differences here are the small wavelengths and resulting small antenna sizes as well as the high atmospheric absorption above 100 GHz and the strong elevation angle dependence that makes terrestrial use with strong control of high elevation angle antenna sidelobes a promising path. The webinar will discuss this and other options as well as the ITU-R for a look at where these discussions are focused now and how one can participate in the deliberations.

Speakers’ Bio: Michael J. Marcus is a native of Boston and received S.B. and Sc.D. degrees in electrical engineering from MIT. Prior to joining the FCC in 1979, he worked at Bell Labs on the theory of telephone switching, served in the U.S. Air Force where he was involved in underground nuclear test detection research, and analyzed electronic warfare issues at the Institute for Defense Analyses. At FCC his work focused on proposing and developing policies for cutting edge radio technologies such as spread spectrum/CDMA and millimeter waves. Wi-Fi is one outcome of his early leadership. The total amount of spectrum he proposed for unlicensed use and directed the drafting of implementing rules was 8.234 GHz. He also participated in complex spectrum sharing policy formulation involving rulemakings such as ultrawideband and MVDDS. Awarded a Mike Mansfield Fellowship in 1997, he studied the Japanese language and spent a year at the FCC’s Japanese counterpart. He retired from FCC in March 2004 after servicing a senior technical advisor to the Spectrum Policy Task Force and codirecting the preparation of the FCC’s cognitive radio rulemaking. Immediately after retirement he lived in Paris France for 3 years, consulting for US and European clients. In 2006 he was appointed Special Advisor to Mrs. Viviane Reding, European Commissioner for Information Society & Media.He is now Director of Marcus Spectrum Solutions LLC, an independent consulting firm based in the Washington DC area focusing on wireless technology and policy. He is also Adjunct Professor of Electrical and Computer Engineering and Principal Research Scientist, Institute for the Wireless Internet of Things at Northeastern University. He was recognized as a Fellow of the IEEE “for leadership in the development of spectrum management policies”, received in 1994 IEEE-USA’s first Electrotechnology Transfer Award, and received in 2013 the IEEE ComSoc Award for Public Service in the Field of Telecommunications “For pioneering spectrum policy initiatives that created modern unlicensed spectrum bands for applications that have changed our world.

Josep Miquel Jornet is an Associate Professor in the Department of Electrical and Computer Engineering, the director of the Ultrabroadband Nanonetworking (UN) Laboratory, and a member of the Institute for the Wireless Internet of Things and the SMART Center at Northeastern University (NU). He received a Degree in Telecommunication Engineering and a Master of Science in Information and Communication Technologies from Barcelona School of Telecommunications Engineering (ETSETB), Universitat Politècnica de Catalunya, Spain, in 2008. From September 2007 to December 2008, he was a visiting researcher at the Massachusetts Institute of Technology, Cambridge, under the MIT Sea Grant program. He received the Ph.D. degree in Electrical and Computer Engineering from the Georgia Institute of Technology, Atlanta, GA, in August 2013. Between August 2013 and August 2019, he was in the Department of Electrical Engineering at the University at Buffalo (UB), The State University of New York (SUNY). His research interests are in Terahertz communication networks, wireless nano-bio-communication networks, and the Internet of Nano-Things. In these areas, he has co-authored more than 160 peer-reviewed scientific publications, including 2 book and 4 US patents. His work has received more than 10,200 citations (h-index of 46 as of July 2021). Since July 2016, he is the Editor-in-Chief of Elsevier’s Nano Communication Networks Journal. He is serving as the lead PI on multiple grants from U.S. federal agencies including the National Science Foundation, the Air Force Office of Scientific Research (AFOSR), and the Air Force Research Laboratory (AFRL). He received the National Science Foundation CAREER Award in 2019 and is the recipient of several other awards from IEEE, ACM, UB and NU.

This event is sponsored by Cadence.