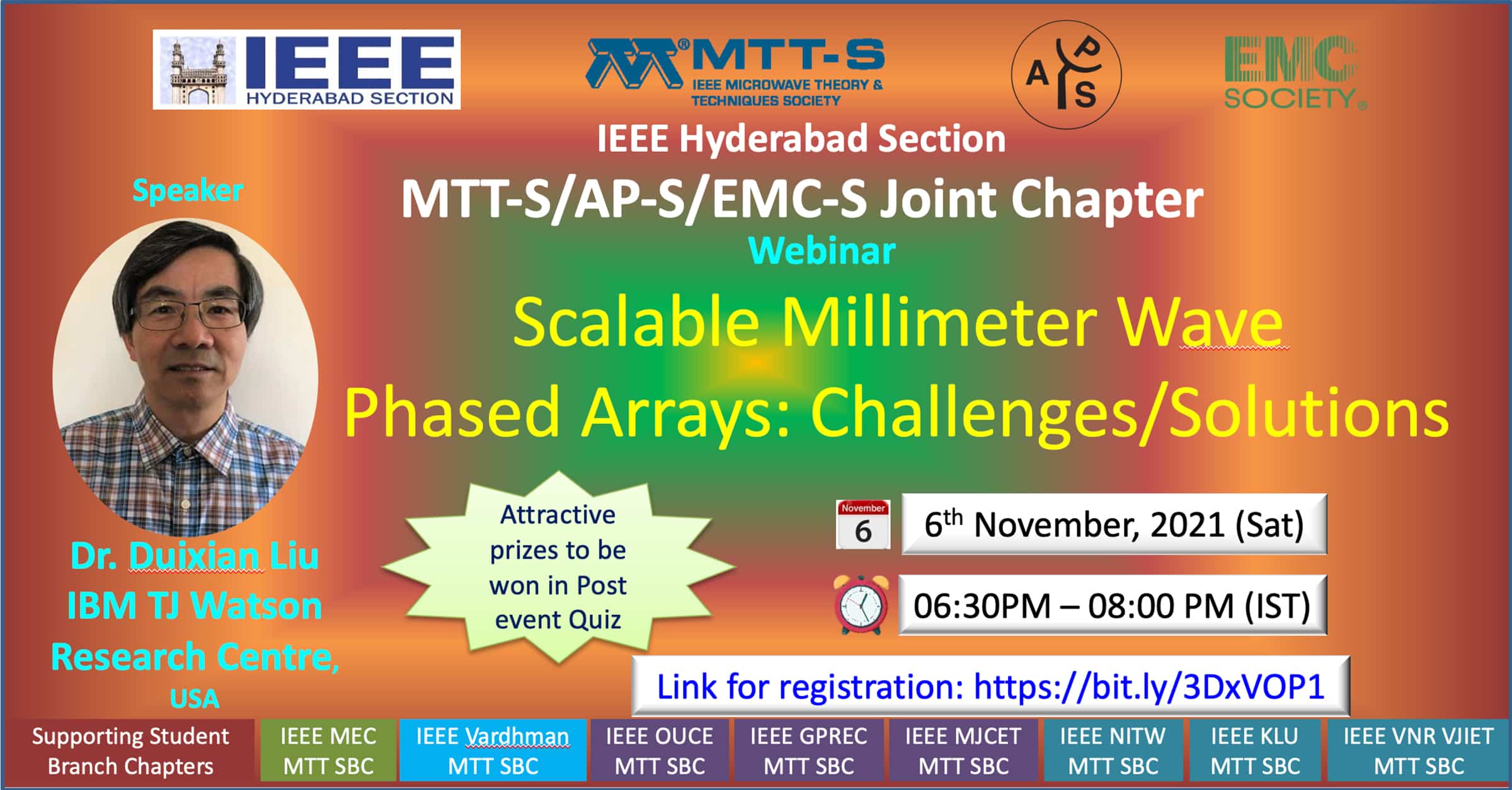 Abstract: Advances in Si-based millimeter-wave circuit design, Si-based phased arrays, and low-cost antenna integration techniques have enabled the development of scalable phased arrays supporting 10s to 100s of elements. Si-based scalable phased arrays now operate from 28-GHz to 100-GHz frequency range. Fabricated scalable phased arrays with multiple ICs/tiles and beam forming measurements can have with 64 or more elements. The general scaling approach remains the most commonly adopted. Commercial applications of millimeter-wave technology such as 5G, backhaul, and automotive sensor systems will provide further demand for scalable phased arrays in years to follow. Open problems and opportunities remain to improve phased array performance, robustness, and cost. Key areas of potential research in this area include (1) development of new millimeter-wave package and antenna implementation and assembly techniques for improved yield and manufacturability, (2) co-integration of Si and III-V based ICs at the module level, (3) development of module-level design for testability techniques, and (4) further development of digital design and RF-digital co-design approaches to enable adaptability and agility. This talk discusses the need for scalable phased arrays and outlines key challenges for their implementation. Design trade-offs are discussed for important aspects such as beamforming architecture, module-level realization with antennas and packaging, and digital control. Two recently introduced scaled 64-element dual polarized phased array designs from our group are reviewed as implementation examples. (1) A phased array operating at 28-GHz supporting 5G base station applications, and (2) TX and RX phased arrays operating at 94-GHz suitable for backhaul and imaging applications. An outlook for future opportunities with phased array scaling is provided.

Speaker’s Bio: Dr. Duixian Liu received the B.S. degree in electrical engineering from XiDian University, Xi’an, China, in 1982, and the M.S. and Ph.D. degrees in electrical engineering from the Ohio State University, Columbus, in 1986 and 1990, respectively. From 1990 to 1996, he was with Valor Enterprises Inc. Piqua, Ohio, initially as an Electrical Engineer and then as the Chief Engineer, during which time he designed an antenna product line ranging from 3 MHz to 2.4 GHz for the company, a very important factor for the prestigious Presidential “E” Award for Excellence in Exporting in 1994. Since April 1996, he has been with the IBM T. J. Watson Research Center, Yorktown Heights, NY, as a Research Staff Member. He has received five IBM’s Outstanding Technical Achievement Awards and one Corporate Award (IBM’s official acknowledgement of breakthrough technical achievements that have led to significant market and industry success for the company). He was named Master Inventor in 2007. He was the chief editor for Advanced Millimeter-wave Technologies – Antennas, Packaging and Circuits published by Wiley in 2009, co-editor for Handbook of Antenna Technologies published by Springer in 2016, and editor for Antenna-in-Package Technology and Applications published by Wiley in March 2020. He has authored or coauthored more than 130 journal and conference papers. He received the Best Paper Prize of the 2007 IEEE International Workshop on Antenna Technology for “Antenna-in-package in LTCC for 60 GHz Radio,” the 2012 S. A. Schelkunoff Prize Paper Award of the IEEE Antennas and Propagation Society for “Dual Grid Array Antennas in a Thin-Profile Package for Flip-Chip Interconnection to Highly Integrated 60-GHz Radios,” the 2017 IEEE Journal of Solid-State Circuits Best Paper Award for “A 28-GHz 32-Element TRX Phased-Array IC With Concurrent Dual-Polarized Operation and Orthogonal Phase and Gain Control for 5G Communications,” and the IEEE Antennas and Propagation Society 2020 John Kraus Antenna Award for “pioneering and significant contributions to the development of antenna-in-package (AiP) technology.” He has 132 patents issued. His research interests are antenna design, EM modeling, chip packaging, signal processing, communications technologies, software-defined radios, and quantum computing. Dr. Liu is a Fellow of IEEE, and was an associate editor for the IEEE Transactions on Antennas and Propagation (2005-2013), a Guest Editor for the IEEE Transactions on Antennas & Propagation special issues on Antennas and Propagation Aspects of 60-90 GHz Wireless Communications (October 2009), Antennas and Propagation at mm- and sub mm-waves (April 2013), Antennas and Propagation Aspects of 5G Communications (October 2017), and for the IEEE AWPL for a Special Cluster Antenna-in-Package, Antenna-on-Chip, Antenna-IC Interface: Joint Design and Co-integration Aspects (2019), the Lead Guest Editor for International Journal of Antennas and Propagation on special issues on Wearable and RFID Antennas (July 2013). He has been an organizer or chair for numerous international conference sessions or special sessions and served as a technical program committee member for many international conferences. He was the general chair of the 2006 IEEE International Workshop on Antenna Technology: Small Antennas and Novel Metamaterials, White Plains, New York. He has served as an external Ph.D. examiner for several universities and external examiner for government organizations on research grants. He has been invited to give talks on mmWave and antenna-in-package designs to universities and IEEE local chapters in USA, Canada, Sweden, the Netherlands, Singapore, Japan, Taiwan, Pakistan, India, and China, and organizations such as the FCC Technological Advisory Council (TAC) Antenna Technology Working Group, National Science Foundation and the European Patent Office. He is a distinguished lecturer of the IEEE Antennas and Propagation Society (AP-S) for the period of 2020-2023.

This event is organised by MTTS/AP/EMCS Joint Chapter Hyderabad Section.