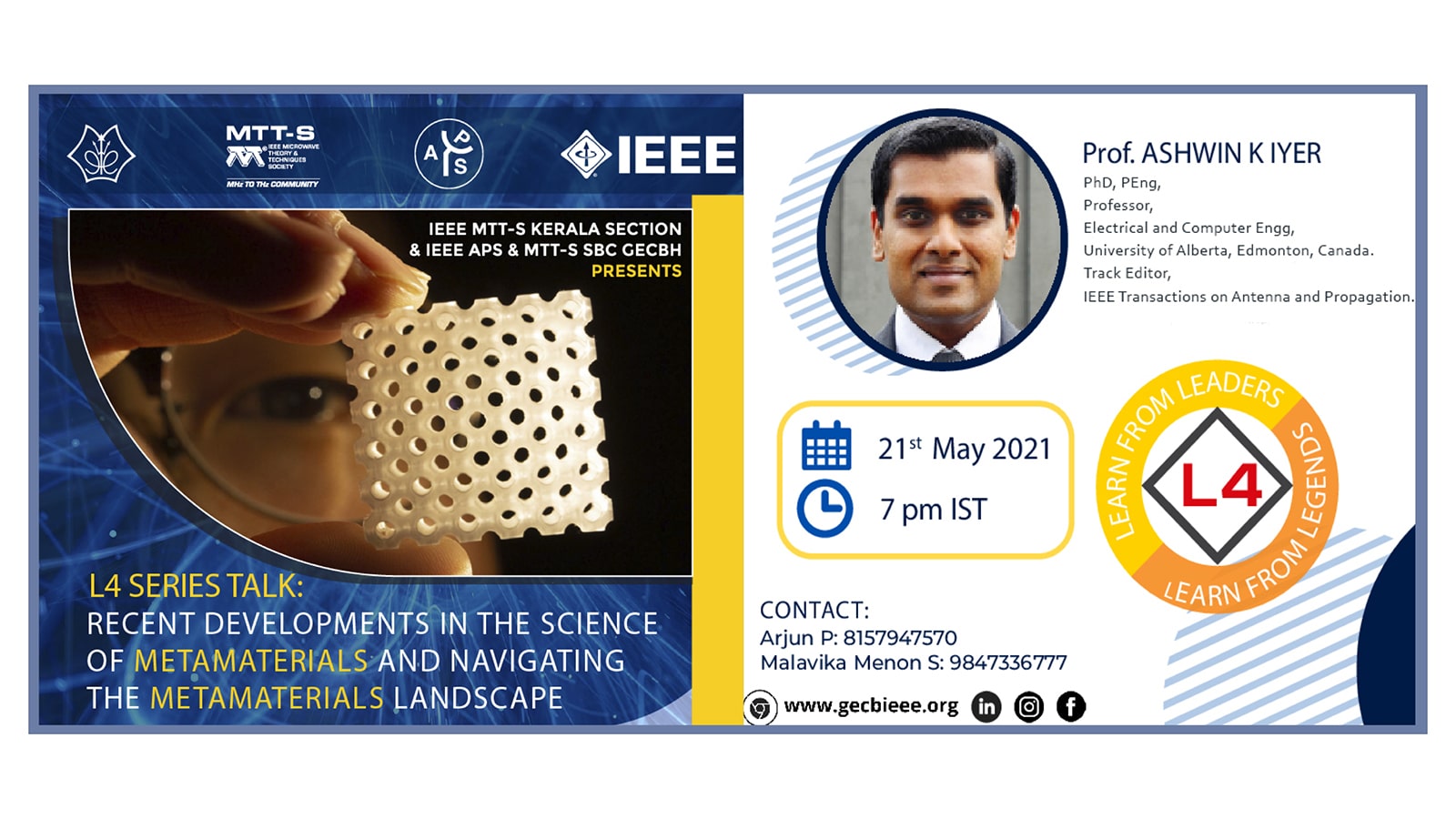 Abstract: The spectacular early growth of metamaterials research was fueled by fantastic ideas like invisibility and subdiffraction imaging. These ideas, however, are just manifestations of a much more tangible and exciting concept: that metamaterials afford unprecedented control over electromagnetic waves. Our group at the University of Alberta is focused on the theoretical understanding and experimental validation of new metamaterial phenomena, with a view to leveraging metamaterial-enabled functionalities in applications across the electromagnetic spectrum. In this talk, I will describe a few of our discoveries in antenna and waveguide miniaturization, novel sensors, and new mechanisms of imaging and wave manipulation using metasurfaces. In the latter half of the talk, I will discuss some of the challenges perceived by electrical-engineering students entering the field of metamaterials today and how they may navigate this landscape to derive from it a satisfying and productive research career.

Speaker’s Bio: Ashwin K. Iyer received the Ph.D. degree in electrical engineering from the University of Toronto, Canada in 2009. He joined the faculty of the University of Alberta Dept. of Electrical & Computer Engineering in the fall of the same year and leads a team of talented graduate students in several areas of RF/microwave and antenna engineering. A large focus of his research involves the analysis, characterization, and experimental validation of metamaterial phenomena and their applications. Dr. Iyer was part of the pioneering effort at the University of Toronto in the early 2000s in developing metamaterials that exhibit a negative refractive index and the demonstration of free-space subdiffraction imaging – contributions that have shaped the evolution of metamaterials research and mobilized later work in this area. He is an author of several papers in the fields of RF/microwave engineering, antennas, physics, and optics, with a total citation count of nearly 2600, and he has co-authored 4 invited chapters appearing in the earliest textbook references on the subject of metamaterials. Dr. Iyer has received numerous awards, including the IEEE AP-S R. W. P. King Award (2008) and Donald G. Dudley Jr. Undergraduate Teaching Award (2015) and both of the University of Alberta’s premier undergraduate teaching awards (2014, 2018). He serves the IEEE AP-S in many capacities; he was an Associate Editor of the IEEE Transactions on Antennas and Propagation (T-AP) from 2012 to 2018 and now serves as one of eleven international Track Editors. He was also the Lead Guest Editor for the IEEE T-AP Special Issue on Recent Advances in Metamaterials and Metasurfaces, which was the largest special issue in the history of the T-AP. He also serves on the IEEE AP-S Education Committee, under which he introduced the (now perennial) AP-S Master Class series, and he has served as a TPC Co-Chair for the AP-S/URSI Symposium three times (2015, 2016, 2020). Dr. Iyer is a registered member of the Association of Professional Engineers and Geoscientists of Alberta (APEGA).

The event is organized by IEEE MTT-S KERALA SECTION and IEEE APS & MTT-S SBC GECBH.
The registration for the event is free but mandatory. All active participants will be given E-Certificate of participation.