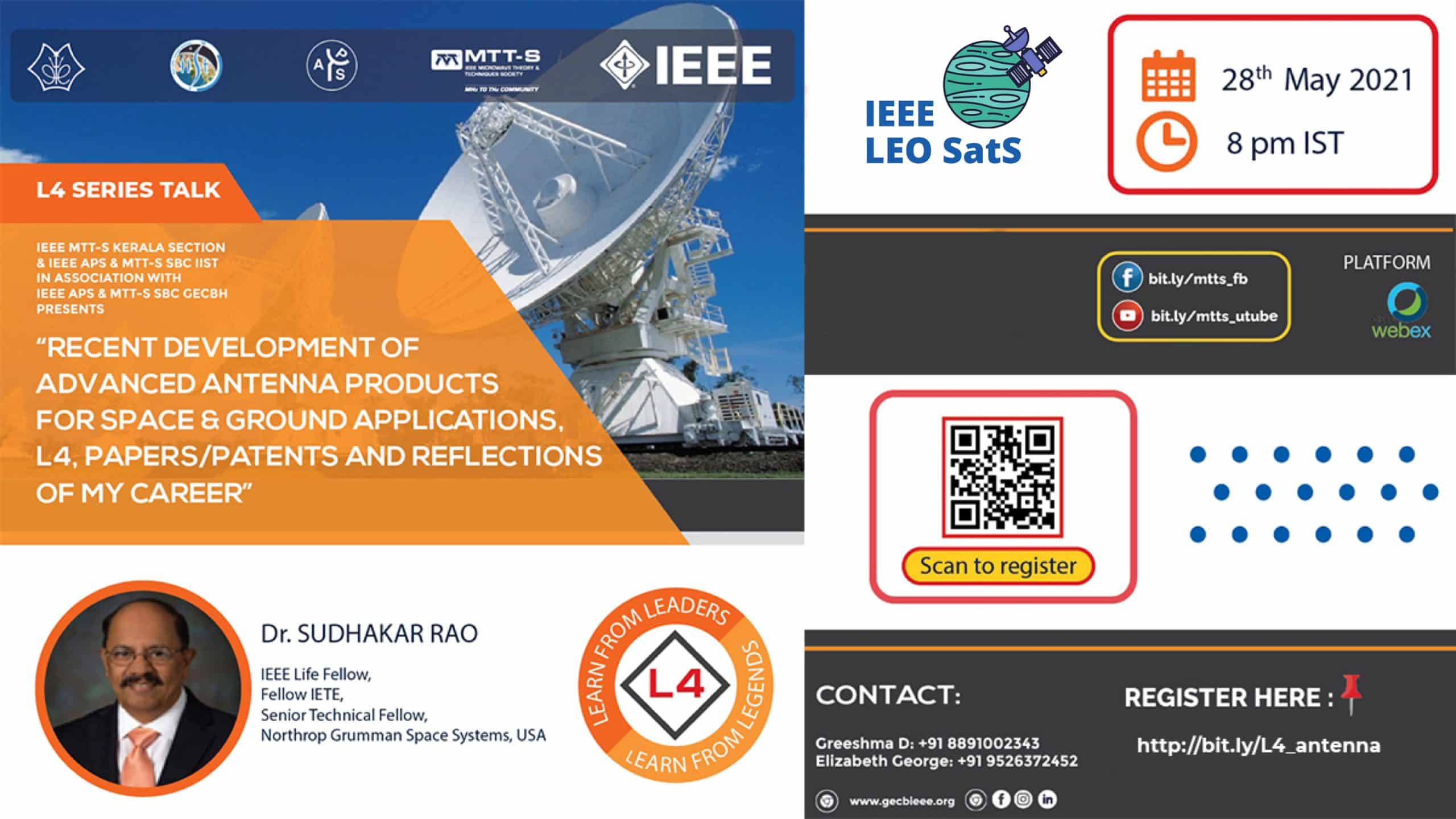 Abstract: This talk is tailored towards students, young professionals and researchers. Learn from Leaders, Learn from Legends (L4) is a great initiative from IEEE MTT-S Kerala Chapter that started recently to motivate youngsters working in the areas of antennas and microwaves. My views about legends and leaders in antenna community with some examples will be given in the beginning of this talk. A brief presentation on writing successful papers and submitting invention disclosures for patenting a design/concept will be given including some examples. Reflections on my student and professional career will be discussed. Antennas are “Eyes and Ears” of modern-day satellite communication systems. They form an important part of any communications payloads influencing the coverage, required gain to close the communication link, bandwidth, capacity/data rates and polarization. Antenna engineering is a highly specialized skill in the industry and the role of antenna engineer is to develop appropriate products and qualify. Antenna field is very interesting and exciting to students and has lot of scope for innovation. Recent developments of antenna designs/products for space, air and ground applications will be described. These include W/V band satellite antennas providing large bandwidths for future satellites, antennas for ground applications with emphasis on size and mass, extremely ultra wide band (E-UWB) antennas, multi-band antennas and ring antennas for vehicular applications. At the end of this talk, the attendees will be exposed to various aspects of developing advanced antenna products, writing good technical papers and submitting invention disclosures for potential patents.

Speaker’s Bio: Dr. Sudhakar Rao is currently working as the Senior Technical Fellow at Northrop Grumman Space Systems providing technical leadership for all divisions of Northrop Grumman in the areas of antennas and payload development for various key programs, proposals and IRAD. Dr. Rao received B. Tech from REC Warangal, M. Tech from IIT Kharagpur and Ph. D in from IIT Madras. He worked at ECIL Hyderabad, LRDE Bangalore, was the post-doctoral fellow at the University of Trondheim, Norway and then worked as a research associate at University of Manitoba, Canada during 1982-1983. Over the past 38 years, he worked at Spar Aerospace Limited, Canada, Boeing Satellite Systems, Lockheed Martin and now at Northrop Grumman and contributed to antenna & payloads for more than 85 different satellites. His work on development of radiation templates for complex satellite antenna patterns for interference analysis was adopted and recommended by the International Telecommunication Union (ITU)/CCIR in 1992 as the world-wide standard for satellite manufacturers and operators. He authored over 220 technical papers and was awarded with 56 patents (51 US & 5 European) and 5 trade secrets. His fundamental work on the design of multiple beam antennas in 1999 has been used by satellite industry world-wide. He authored and co-edited three text book volumes on “Handbook of Reflector Antennas and Feed Systems” that were published in June 2013 by the Artech House. Dr. Rao is an IEEE Life Fellow and a Fellow of IETE. He received several awards including the IEEE Benjamin Franklin Key Award in 2006, Delaware Valley Engineer of the Year in 2008, Asian American Engineer of the year award in 2008, IEEE Judith Resnik Technical Field Award in 2009 for pioneering work in aerospace engineering, Boeing’s Special Invention awards in 2001 & 2002, Lockheed Martin’s President Award in 2005, 2007 & 2008, 2009, IEEE Region 6 Outstanding Engineer Award for 2017 and the 2017 Northrop Grumman’s President Award for innovations and contributions to key programs. He received Distinguished Alumni Professional Achievement Award from his alma mater NIT Warangal in 2016 and IETE’s Prof. S.N. Mitra Memorial Award in 2016. Recently, he received the 2020 IETE’s Biman Behari Sen Memorial Award. Dr. Rao served as the Distinguished Lecturer for the IEEE APS and as an AdCom member for IEEE APS. He was the founder and Chair for the IEEE APS “Industry Initiatives Committee” during 2011-2015, IEEE APS Fellow Evaluation Committee member during 2015-2017, founder and Editor of the IEEE Antennas & Propagation Magazine’s “Antenna Applications Corner”, Associate Editor for the IEEE Transactions on Antennas & Propagation, and Associate Editor of IEEE AWPL. He is the Executive Committee Member for the InCAP series of conferences in India. Dr. Rao delivered invited and keynote talks for more than 50 conferences world-wide. Recently, he was appointed by the IEEE Board of Directors to serve as the IEEE Fellow Committee member for 2020 & 2021 and is a member of the IEEE Fellow Strategic Planning Subcommittee (FSPS) for 2021. He instituted IETE – Dr. Sudhakar Rao Award in 2020 to recognize and honor outstanding antenna engineers.

The registration for the event is free of cost but mandatory and an E-Certificate of participation will be given to all active participants.