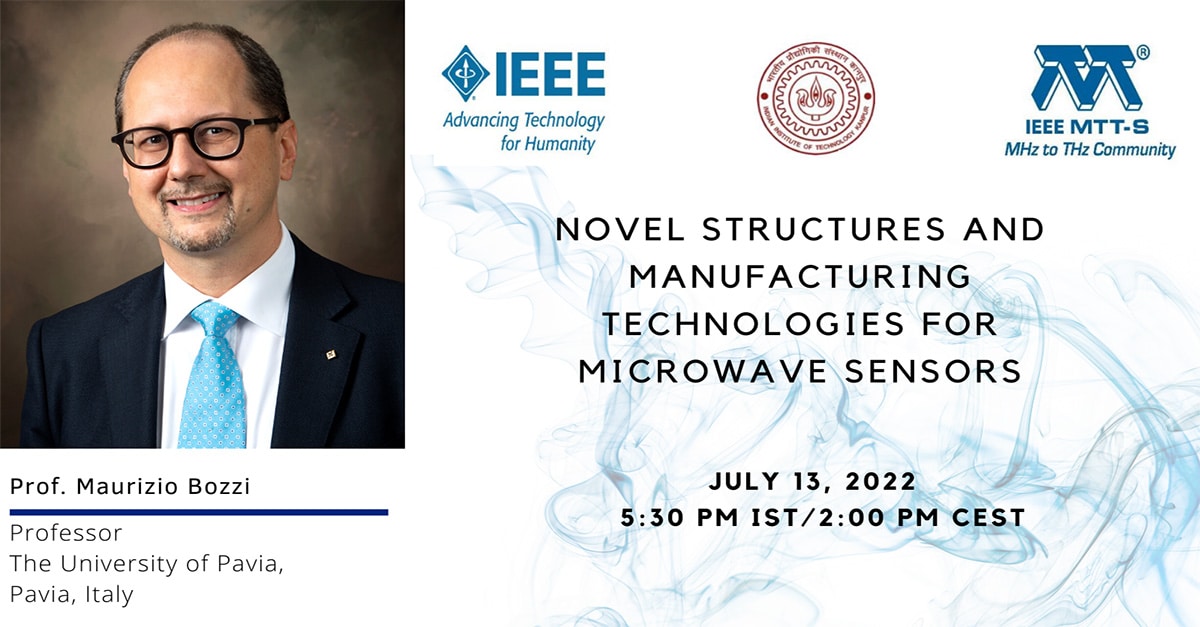 Abstract: The use of wireless systems integrating sensing capabilities is becoming increasingly relevant for several applications under the umbrella of the Internet of Things. A broad range of different physical quantities can be determined by adopting electromagnetic techniques at microwave frequency: among them, an important class of sensors aims at the determination of the electric and magnetic characteristics of materials, for instance with the scope to establish the content of a certain element in liquids. Another class of sensors are devoted to the accurate determination of the linear or the angular displacement of a target. Depending on the intended application, the requested features of microwave sensors are typically the compact size, the low manufacturing cost, and the easy design and fabrication, as well as the good accuracy of the results. Various technological processes can be used for the implementation and manufacturing of microwave sensors. In the last years, the use of substrate integrated waveguide (SIW) technology is gaining more and more interest, due to its simple and low-cost fabrication process and the possibility to integrate entire systems on a single dielectric substrate, including the devices for the generation of the RF/microwave signal and for the processing of the collected information. The use of planar transmission lines (like microstrip lines and coplanar waveguides) combined with a complementary split-ring resonator (CSRR) is particularly interesting for compact sensors of displacement and rotation. Another relevant fabrication technique is the additive manufacturing, which allows for the implementation of components with arbitrary shape and permits a rapid prototyping. Unconventional fabrication techniques and materials, like ink-jet printing on paper substrate, can be adopted for applications with specific requirements. This talk will provide an overview of some recent achievements in the area of microwave sensors, for applications ranging from the characterization of the electrical properties of materials to the determination of rotation and proximity. The use of planar structures and SIW technology, the fabrication by additive manufacturing, as well as the adoption of hybrid solutions will be presented and discussed.

Speaker’s Bio: Maurizio Bozzi received the Ph.D. degree in electronics and computer science from the University of Pavia, Pavia, Italy, in 2000. In 2002, he joined the Department of Electronics, University of Pavia, where he is currently a full professor of electromagnetic fields. He held research positions with various universities worldwide, including the Technische Universität Darmstadt, Germany; the Universitat de Valencia, Spain; and the École Polytechnique de Montréal, Canada. He was also a Guest Professor at Tianjin University, China (2015-2017) and a Visiting Professor at Gdansk University of Technology, Poland (2017-2018). He has authored or co-authored more than 150 journal papers and 340 conference papers. He co-edited the book Periodic Structures (Research Signpost, 2006) and co-authored the book Microstrip Lines and Slotlines (Artech House, 2013). His main research interests concern the computational electromagnetics, the substrate integrated waveguide technology, and the use of novel materials and fabrication technologies for microwave circuits. Prof. Bozzi is an Elected Member of the Administrative Committee of the IEEE Microwave Theory and Techniques Society (MTT-S) for years 2017–2022 and the current MTT-S Treasurer. He was the Chair of the Meetings and Symposia Committee of MTT-S AdCom for years 2018-2019, the Secretary of IEEE MTT-S for year 2016, and a member of the General Assembly (GA) of the European Microwave Association (EuMA) for the term 2014–2016. He is a Track Editor of the IEEE TRANSACTIONS ON MICROWAVE THEORY AND TECHNIQUES. He was an Associate Editor of the IEEE MICROWAVE AND WIRELESS COMPONENTS LETTERS, IET Electronics Letters, and IET Microwaves, Antennas and Propagation. He was the Guest Editor of special issues in the IEEE TRANSACTIONS ON MICROWAVE THEORY AND TECHNIQUES, the IEEE MICROWAVE MAGAZINE, and the IET Microwaves, Antennas and Propagation. He was the General Chair of the IEEE MTT-S International Microwave Workshop Series-Advanced Materials and Processes (IMWS-AMP 2017), in Pavia, Italy, 2017, of the inaugural edition of the IEEE International Conference on Numerical Electromagnetic Modeling and Optimization (NEMO2014), in Pavia, Italy, 2014, and of the IEEE MTT-S International Microwave Workshop Series on Millimeter Wave Integration Technologies, in Sitges, Spain, 2011. Maurizio Bozzi is a IEEE Fellow (class of 2018). He received several awards, including the 2015 Premium Award for Best Paper in IET Microwaves, Antennas & Propagation, the 2014 Premium Award for the Best Paper in Electronics Letters, the Best Student Paper Award at the 2016 IEEE Topical Conference on Wireless Sensors and Sensor Networks (WiSNet2016), the Best Paper Award at the 15th Mediterranean Microwave Symposium (MMS2015), the Best Student Award at the 4th European Conference on Antennas and Propagation (EuCAP 2010), the Best Young Scientist Paper Award of the XXVII General Assembly of URSI in 2002, and the MECSA Prize of the Italian Conference on Electromagnetics (XIII RiNEm), in 2000.