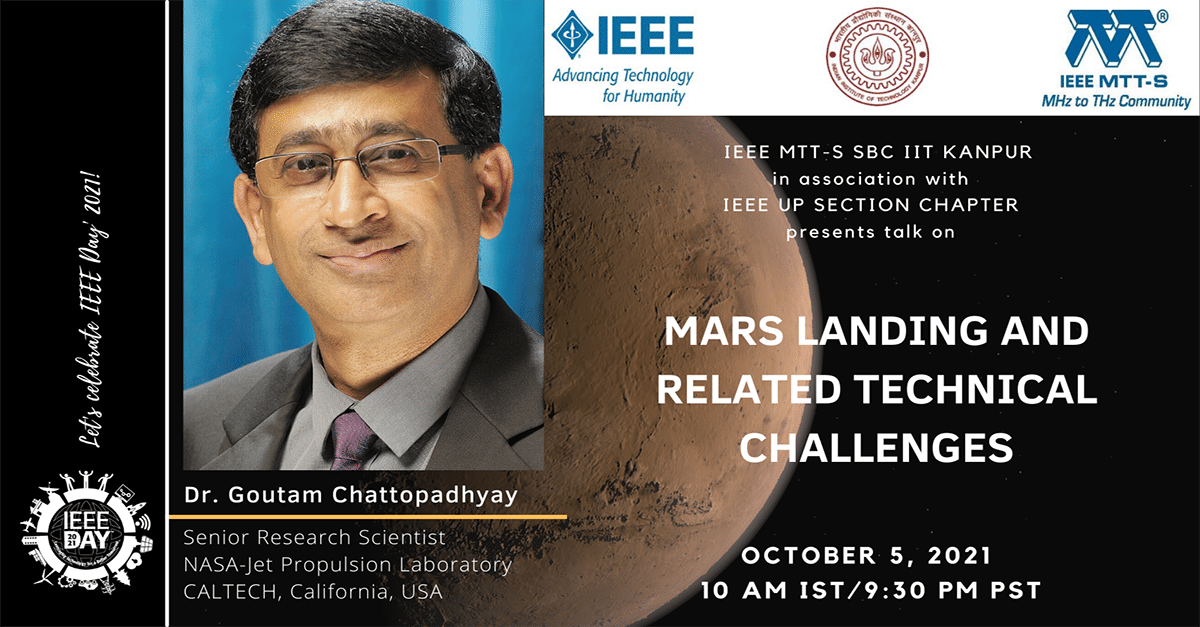 Abstract: NASA’s Jet Propulsion Laboratory, which completed eighty years of its existence in 2016, builds instruments for NASA missions. Exploring the universe and our own planet Earth from space has been the mission of NASA. Robotics missions such as Voyager, which continues to go beyond our solar system, missions to Mars and other planets, exploring the stars and galaxies for astrophysics missions, exploring and answering the question, “are we alone in this universe?” has been the driving force for NASA scientists for more than six decades. Fundamental science questions drives the selection of NASA missions. And to answer some of the fundamental science questions, NASA took multiple trips to the red planet Mars. Mars in its early history resembled a lot like our own planet. Landing on Mars is extremely challenging. In this presentation, we will discuss those challenges and the technologies we developed to address them. We will also present an overview of the state of the art instruments that we are currently developing and layout the details of the science questions they will try to answer. Rapid progress on multiple fronts, such as commercial software for component and device modeling, low-loss circuits and interconnect technologies, cell phone technologies, and submicron scale lithographic techniques are making it possible for us to design and develop smart, low-power yet very powerful instruments that can even fit in a SmallSat or CubeSat. We will also discuss the challenges of future generation instruments in addressing the needs for critical scientific applications. The research described herein was carried out at the Jet Propulsion Laboratory, California Institute of Technology, Pasadena, California, USA, under contract with National Aeronautics and Space Administration.

Speaker’s Bio: Goutam Chattopadhyay is a Senior Scientist at the NASA’s Jet Propulsion Laboratory, California Institute of Technology, a Visiting Associated at the Division of Physics, Mathematics, and Astronomy at the California Institute of Technology, Pasadena, USA. He received the Ph.D. degree in electrical engineering from the California Institute of Technology (Caltech), Pasadena, in 2000. He is a Fellow of IEEE (USA) and IETE (India) and an IEEE Distinguished Lecturer. His research interests include microwave, millimeter-wave, and terahertz receiver systems and radars, and development of space instruments for the search for life beyond Earth. He has more than 350 publications in international journals and conferences and holds more than twenty patents. He also received more than 35 NASA technical achievements and new technology invention awards. He received the IEEE Region-6 Engineer of the Year Award in 2018, Distinguished Alumni Award from the Indian Institute of Engineering Science and Technology (IIEST), India in 2017. He was the recipient of the best journal paper award in 2020 and 2013 by IEEE Transactions on Terahertz Science and Technology, best paper award for antenna design and applications at the European Antennas and Propagation Conference (EuCAP) in 2017, and IETE Prof. S. N. Mitra Memorial Award in 2014. He is an elected AdCom member of the IEEE MTTS and Chair of the Meetings and Symposia Committee.

This event is organised by IEEE MTT-S SBC IIT Kanpur.