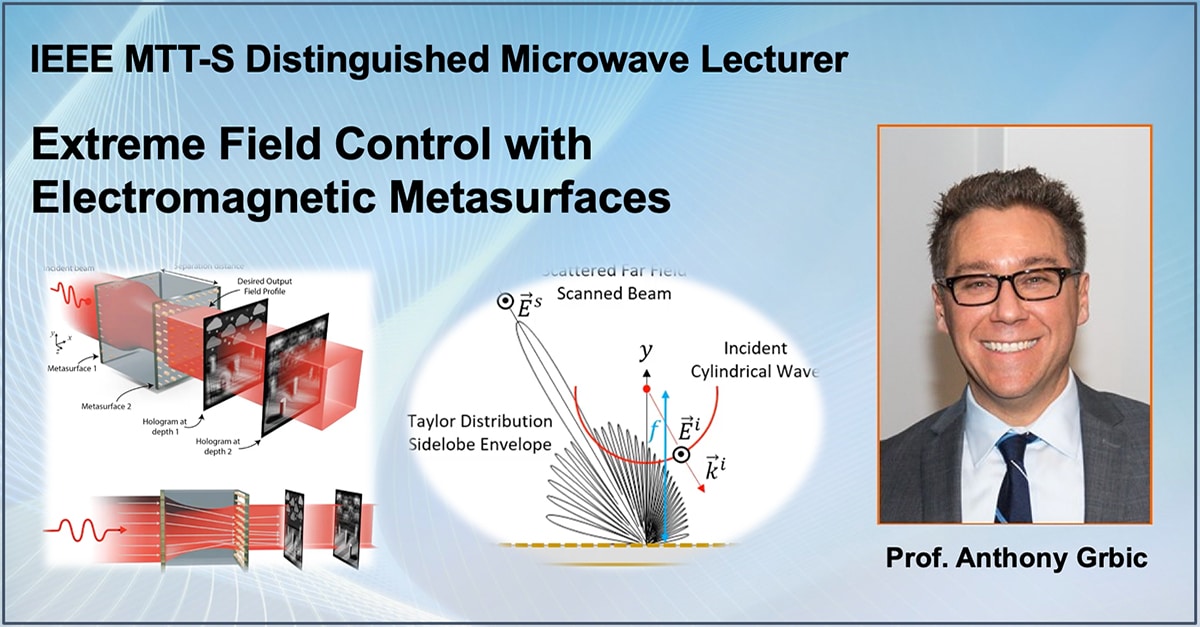 Abstract: The research area of metamaterials has captured the imagination of scientists and engineers over the past two decades by allowing unprecedented control of electromagnetic fields. The extreme manipulation of fields has been made possible by the fine spatial control and wide range of material properties that can be attained through subwavelength structuring. Research in this area has resulted in devices which overcome the diffraction limit, render objects invisible, and even break time reversal symmetry. It has also led to flattened and conformal optical systems and ultra-thin antennas. This seminar will identify recent advances in the growing area of metamaterials, with a focus on metasurfaces: two dimensional metamaterials. The talk will explain what they are, the promise they hold, and how these field-transforming surfaces are forcing the rethinking of electromagnetic/optical design. Electromagnetic metasurfaces are finely patterned surfaces whose intricate patterns/textures dictate their electromagnetic properties. Conventional field-shaping devices, such as lenses in prescription eye glasses or a magnifying glass, require thickness (propagation length) to manipulate electromagnetic waves through interference. In contrast, metasurfaces manipulate electromagnetic waves across negligible thicknesses through surface interactions, by impressing abrupt phase and amplitude discontinuities onto a wavefront. The role of the visible (propagating) and invisible (evanescent) spectrum in establishing these discontinuities will be explained. In addition, it will be shown how metasurfaces allow the complete transformation of fields across a boundary, and how this unique property is driving a new generation of ultra-compact electromagnetic and optical devices with unparalleled field control. Metasurfaces will be described that exhibit various field tailoring capabilities including multiwavelength and multifunctional performances and extreme field shaping. In addition, metasurfaces with multi-input to multi-output capabilities will be presented that open new opportunities in adaptive and trainable designs.

Speaker’s Bio: Anthony Grbic received the B.A.Sc., M.A.Sc., and Ph.D. degrees in electrical engineering from the University of Toronto, Canada, in 1998, 2000, and 2005, respectively. In 2006, he joined the Department of Electrical Engineering and Computer Science, University of Michigan, Ann Arbor, MI, USA, where he is currently a Professor. His research interests include engineered electromagnetic structures (metamaterials, metasurfaces, electromagnetic band-gap materials, frequency-selective surfaces), microwave circuits, antennas, plasmonics, wireless power transmission, and analytical electromagnetics/optics. Anthony Grbic has made pioneering contributions to the theory and development of electromagnetic metamaterials and metasurfaces: finely textured, engineered electromagnetic structures/surfaces that offer unprecedented wavefront control. Dr. Grbic is a Fellow of the IEEE. He is currently an IEEE Microwave Theory and Techniques Society Distinguished Microwave Lecturer (2022-2025). He is also serving on the IEEE Antennas and Propagation Society (AP-S) Field Awards Committee and IEEE Fellow Selection Committee. From 2018 to 2021, he has served as a member of the Scientific Advisory Board, International Congress on Artificial Materials for Novel Wave Phenomena – Metamaterials. In addition, he has been Vice Chair of Technical Activities for the IEEE Antennas and Propagation Society, Chapter IV (Trident), IEEE Southeastern Michigan Section, from Sept. 2007 – 2021. From July 2010 to July 2015, he was Associate Editor for the rapid publication journal IEEE Antennas and Wireless Propagation Letters. Prof Grbic was Technical Program Co-Chair in 2012 and Topic Co-Chair in 2016 and 2017 for the IEEE International Symposium on Antennas and Propagation and USNC-URSI National Radio Science Meeting. Dr. Grbic was the recipient of AFOSR Young Investigator Award as well as NSF Faculty Early Career Development Award in 2008, the Presidential Early Career Award for Scientists and Engineers in January 2010. He also received an Outstanding Young Engineer Award from the IEEE Microwave Theory and Techniques Society, a Henry Russel Award from the University of Michigan, and a Booker Fellowship from the United States National Committee of the International Union of Radio Science in 2011. He was the inaugural recipient of the Ernest and Bettine Kuh Distinguished Faculty Scholar Award in the Department of Electrical and Computer Science, University of Michigan in 2012. In 2018, Prof. Anthony Grbic received a 2018 University of Michigan Faculty Recognition Award for outstanding achievement in scholarly research, excellence as a teacher, advisor and mentor, and distinguished service to the institution and profession. In 2021, he was selected as 1 of 5 finalists worldwide for the A.F. Harvey Engineering Research Prize, for his pioneering contributions to field of electromagnetic metamaterials. The A.F. Harvey Prize is the Institution of Engineering and Technology’s (IET’s) most valuable prize fund.

This event is organised by the MTT-S/AP-S Orlando Chapter and sponsored by the IEEE MTT-S DML Program.