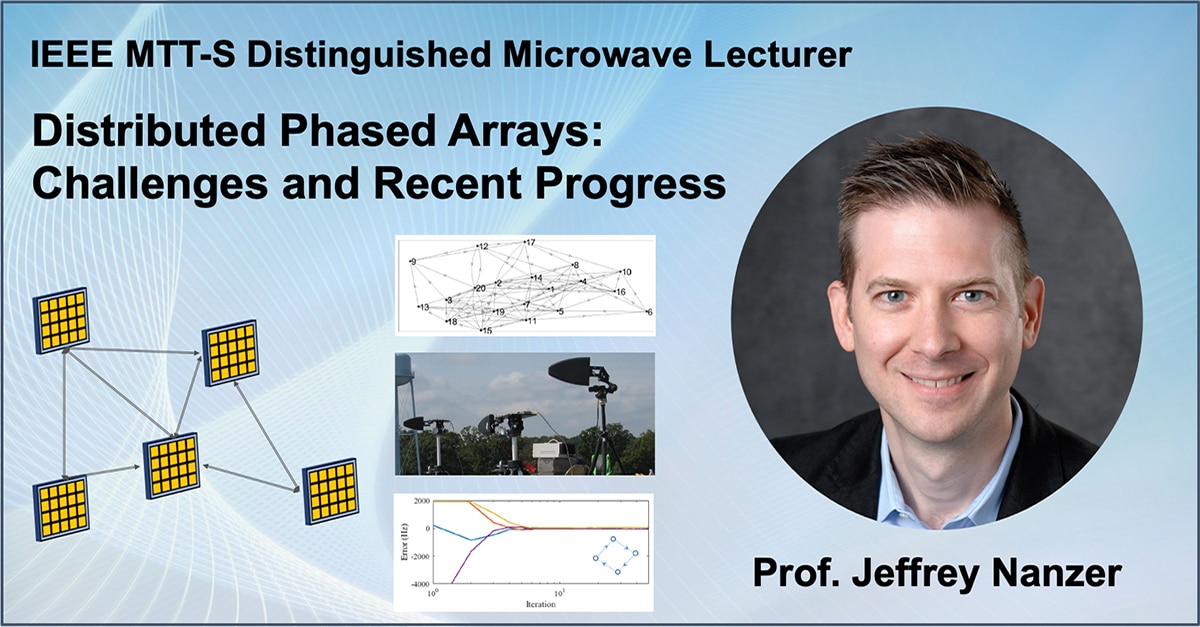 Abstract: There has been significant research devoted to the development of distributed microwave wireless systems in recent years. The progression from large, single-platform wireless systems to collections of smaller, coordinated systems on separate platforms enables significant benefits for radar, remote sensing, communications, and other applications. The ultimate level of coordination between platforms is at the wavelength level, where separate platforms operate as a coherent distributed system. Wireless coherent distributed systems operate in essence as distributed phased arrays, and the signal gains that can be achieved scale proportionally to the number of transmitters squared multiplied by the number of receivers, providing potentially dramatic increases in wireless system capabilities. Distributed array coordination requires accurate control of the relative electrical states of the nodes. Generally, such control entails wireless frequency synchronization, phase calibration, and time alignment, but for remote sensing operations, phase control also requires high-accuracy knowledge of the relative positions of the nodes in the array to support beamforming. This lecture presents an overview of the challenges involved in distributed phased array coordination, and describes recent progress on microwave technologies that address these challenges. Requirements for achieving distributed phase coherence at microwave frequencies are discussed, including the impact of component non-idealities such as oscillator drift on beamforming performance. Architectures for enabling distributed beamforming are reviewed, along with the relative challenges between transmit and receive beamforming. Microwave and millimeter-wave technologies enabling wireless phase-coherent synchronization are discussed, focusing on technologies for high-accuracy internode ranging, wireless frequency transfer, and high-accuracy time alignment. The lecture concludes with a discussion of open challenges in distributed phased arrays, and where microwave technologies may play a role.

Speaker’s Bio: Jeffrey Nanzer (S’02-M’08-SM’14) received the B.S. degree in electrical engineering and computer engineering from Michigan State University, East Lansing, MI, USA, in 2003, and the M.S. and Ph.D. degrees in electrical engineering from The University of Texas at Austin, Austin, TX, USA, in 2005 and 2008, respectively. From 2008 to 2009, he was a Postdoctoral Fellow with Applied Research Laboratories, The University of Texas at Austin, where he was involved in designing electrically small HF antennas and communication systems. From 2009 to 2016, he was with The Johns Hopkins University Applied Physics Laboratory, Laurel, MD, USA, where he created and led the Advanced Microwave and Millimeter-Wave Technology Section. In 2016, he joined the Department of Electrical and Computer Engineering, Michigan State University, where he is currently the Dennis P. Nyquist Associate Professor. He has authored or co-authored more than 150 refereed journal and conference papers, authored the book Microwave and Millimeter-Wave Remote Sensing for Security Applications (Artech House, 2012), and co-authored chapters in the books Wireless Transceiver Circuits (Taylor and Francis, 2015) and Short-Range Micro-Motion Sensing: Hardware, signal processing and machine learning (IET, 2019). His current research interests include distributed arrays, radar and remote sensing, antennas, electromagnetics, and microwave photonics. Dr. Nanzer was a founding member and the First Treasurer of the IEEE APS/MTT-S Central Texas Chapter. He is also a member of the IEEE Antennas and Propagation Society Education Committee and the USNC/URSI Commission B. He was a recipient of the Outstanding Young Engineer Award from the IEEE Microwave Theory and Techniques Society in 2019, the DARPA Director’s Fellowship in 2019, the National Science Foundation (NSF) CAREER Award in 2018, the DARPA Young Faculty Award in 2017, and the JHU/APL Outstanding Professional Book Award in 2012. He has served as the Vice-Chair for the IEEE Antenna Standards Committee from 2013 to 2015 and the Chair of the Microwave Systems Technical Committee (MTT-16) of the IEEE Microwave Theory and Techniques Society from 2016 to 2018. He is also an Associate Editor of the IEEE TRANSACTIONS ON ANTENNAS AND PROPAGATION.

This talk is organised by the MTT-S Boston Chapter and sponsored by the IEEE MTT-S DML program.