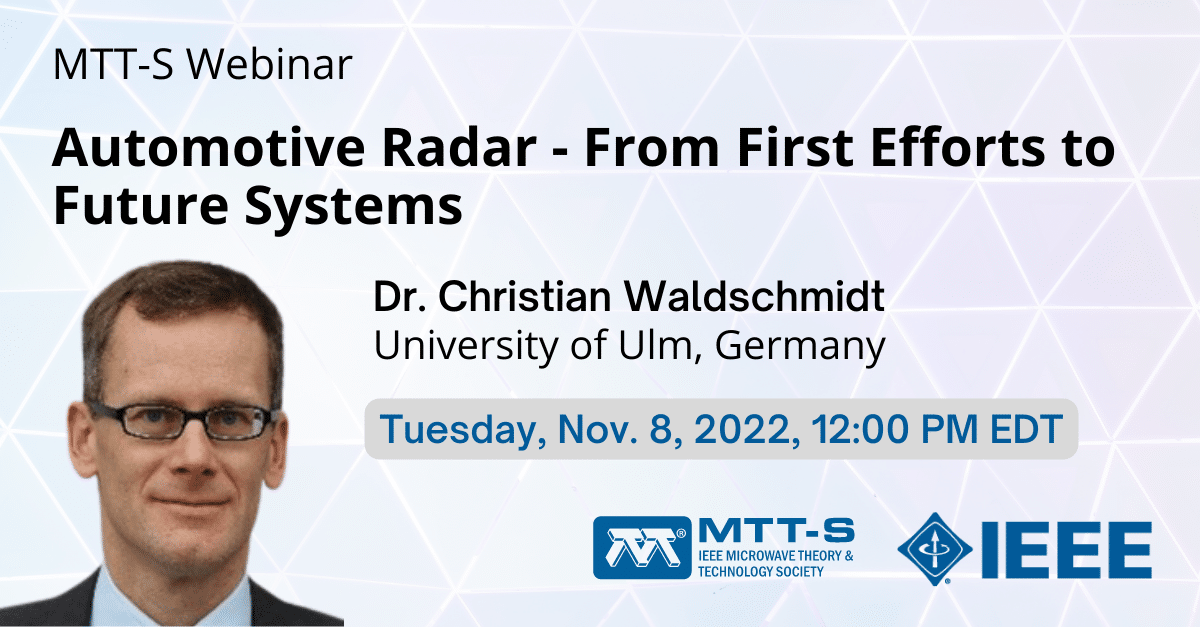 Abstract: Although the beginning of research on automotive radar sensors goes back to the 1960s, automotive radar has remained one of the main drivers of innovation in millimeter wave technology over the past two decades. Today, millions of sensors are produced each year, which was made possible by inexpensive and mature millimeter wave technology. The technology maturity, in turn, enables research to be carried out on systems that are considerably more complex and powerful than was possible just a few years ago. The focus of research has thus shifted from purely hardware-oriented and device-level topics to sophisticated millimeter wave systems and RF signal processing topics. This opens up new research topics such as digital modulation schemes, radar networks, radar imaging, and machine learning. In this webinar, we sketch the path from the very beginning to today’s key research topics of automotive radar.

The webinar takes up the paper of the same name from the IEEE Journal of Microwaves and focuses on the future topics that will accompany research in the next years.

Speaker’s Bio: Christian Waldschmidt received the Dipl.-Ing. (M.S.E.E.) and the Dr.-Ing. (Ph.D.E.E.) degrees from the University Karlsruhe (TH), Karlsruhe, Germany, in 2001 and 2004, respectively. From 2001 to 2004 he was a Research Assistant at the Universität Karlsruhe (TH), Germany. Since 2004 he has been with Robert Bosch GmbH, in the business units Corporate Research and Chassis Systems. He was heading different research and development teams in microwave engineering, rf-sensing, and automotive radar. In 2013 Christian Waldschmidt returned to academia. He was appointed as the Director of the Institute of Microwave Engineering at University Ulm, Germany, as full professor. The research topics focus on radar and rf-sensing, mm-wave and submillimeter-wave engineering, antennas and antenna arrays, rf and array signal processing. He authored or coauthored over 270 scientific publications and more than 20 patents.

He is member of the executive committee board of the German MTT/AP joint chapter, and member of the German Information Technology Society (ITG). He is chair of the IEEE MTT-S TC-29 Technical Committee on Microwave Aerospace Systems and served as chair of MTT-27 Technical Committee on Wireless Enabled Automotive and Vehicular Applications. He was a two-time TPC chair and general chair of the IEEE MTT International Conference on Microwaves for Intelligent Mobility. Since 2018, Christian Waldschmidt serves as associate editor for IEEE MTT Microwave Wireless Components Letters (MWCL). He is a reviewer for multiple IEEE transactions and many IEEE conferences in the field of microwaves. Christian Waldschmidt was co-recipient of 12 best paper awards since 2014.